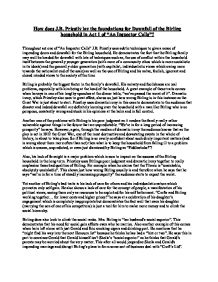 How does J.B Priestley lay foundations for the downfall of the Birling Household within Act 1 of An Inspector Calls?

How does J.B. Priestly lay the foundations for Downfall of the Birling household in Act 1 of "An Inspector Calls"? Throughout act one of "An Inspector Calls" J.B. Priestly uses subtle techniques to give a sense of impending doom and downfall for the Birling household. He demonstrates the fact that the Birling family may well be headed for downfall with lots of techniques such as; the use of conflict within the household itself between the generally younger generation (with more of a community ethos which is more socialistic in its ideals) and the generally older generation (with capitalist, individualistic views which swing more towards the nationalist end of the scale) as well as the use of Birling and his na�ve, foolish, ignorant and closed minded views to the society of the time Birling is probably the biggest factor in the family's downfall. His naivety and foolishness are real problems, especially with him being at the head of the household. A great example of these traits comes when he says in one of his lengthy speeches at the dinner table, "we've passed the worst of it". Dramatic irony, which Priestley also uses to great effect, shows us just how wrong Birling is in this instance as the Great War is just about to start. Priestley uses dramatic irony in this case to demonstrate to the audience that disaster and indeed downfall are definitely looming over the household with a man like Birling who is so pompous, constantly wrong and stuck in his opinions at the helm and in full control. ...read more.

He also highlights the different approaches to responsibility within the household (older and younger generation) and could well represent the voice and the opinion of Priestley himself. When the inspector arrives at the Birling household he is described as making an "impression of massiveness, solidity and purposefulness". This is important because the "massiveness" and "solidity" implies that there is no getting round "purposefulness" of his enquiries. The stage directions also describe him as "looking hard at the person before actually speaking". The hardness of his stare links in with the harder light and the sheer harshness is enough to break through the "cozy" sense of security that the Birlings had before the arrival of the inspector. As well as being used to highlight conflicting views, stage directions are also used to create general presences about people. For example, a stage direction used for the inspector is for when he knocks on the door. The stage direction could describe the inspector just "knocking on the door" but instead we hear the "sharp ring of a door bell". This implies that the inspector will be harsh and concise. Also that he is quite clever and it will be difficult to get around him and his enquiries as he is "sharp". The inspector builds relationships with individual characters through the play, and they become more defined and easier to read as the play goes on. His relationship with Birling is mainly one of argument. Birling's views conflict the most with the inspector. The inspector does not agree with Birling's capitalist views as he doesn't like the way that the capitalist ideas look out for "oneself". ...read more.

Whilst they are both smoking, they are also drinking port and whisky. Both of the drinks are from a decanter, and if you look through a decanter, what you see on the other side is never what it really looks like in real life. Therefore, I think that the alcohol (and even the glassware that the alcohol is poured from) further symbolizes Birling and Gerald's lack of foresight. Another symbol used is the lighting in the room. At the start of the play "the lighting should be pink and intimate" this represents the Birlings feelings of security in their home, even if it is a false sense of security. This false sense of security is underlined when the inspector arrives and the stage directions proclaim that "it (the light) should be brighter and harder". This new brighter, harder light represents the light of truth which is set to expose the Birlings and what they have all done. So to conclude, I think that Priestley lays the foundations for an inevitable downfall right from the off. Priestley's use of Birling is the biggest contributor to the downfall of the household in my opinion as with such a fool at the head of the household something is bound to go wrong. The lack of unity is also another enormous factor, and tension between the household before the inspector even arrives is also another important factor but I think that the foundations are definitely laid in the first few pages of the script. There is a sense of downfall right from the beginning and in my opinion, Priestley makes it more of a case of when and how it will happen, rather than whether it actually will. ALEX BABB ...read more.