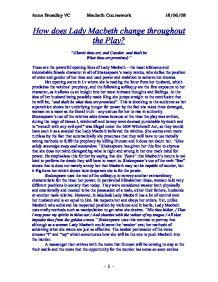 How does Lady Macbeth change throughout the play, &quot;Macbeth&quot;?

How does Lady Macbeth change throughout the Play? "Glamis thou art, and Cawdor, and shalt be What thou art promised;" These are the powerful opening lines of Lady Macbeth - the most infamous and indomitable female character in all of Shakespeare's many works, who defies the position of order and gender of her time and used power and ambition to achieve her dreams. Her opening scene in I.v where she is reading the letter from her husband, which proclaims the witches' prophecy, and the following soliloquy are the first exposure to her character, as it allows us an insight into her most intimate thoughts and feelings. At the idea of her husband being possibly made King she jumps straight to the conclusion that he will be, "and shalt be what thou art promised". This is shocking to the audience as her superstition shows her underlying hunger for power by the fact she takes three deranged, women on a moor as the literal truth - any excuse for her to rise in authority. Shakespeare's use of the witches adds drama because at the time the play was written, during the reign of James I, witchcraft and heresy were deemed punishable by death and to "consult with any evil sprit" was illegal under the 1604 Witchcraft Act, so they would have seen it as a scandal that Lady Macbeth believed the witches. ...read more.

They work as a unit. He shares everything with her, even writing ahead with the news witches' prophecy as he wants her to know all his thoughts and feelings and does what she commands him to. "Look like th'innocent flower, / But be the serpent under't" Lady Macbeth tells Macbeth and he does not refuse only makes a non-committal reply, "We will speak further." This image adds to the sinister apprehension we have for Duncan approaching the castle. The symbol of the evil serpent, dating back to the Creation, hiding under a beautiful, pure flower is another creepy description of their regicide plot. "Leave all the rest to me." Is this final line of the scene which not only leaves the audience in suspense at how the murder will be carried out, but also encapsulates Lady Macbeth personality of control in a sentence and she leaves on a note of power the audience can remember. Within her first five minutes on the stage Shakespeare portrays Lady Macbeth as a powerful, controlling and ruthless woman who has no regard for morals in her attempt at her goal and has dramatic witchlike qualities. Her and husband have an extremely close bond. However, before the end of the play Lady Macbeth is a lonely, defenceless Queen who takes her own life. ...read more.

This difference of saying "undone" shows that she wishes she could change it. The repetition of the hard verb "done" also adds stress to the key points of the sentence. However, Shakespeare also uses this scene to change our attitude towards Lady Macbeth. By using the image of her change from the beginning of the play as an exceedingly powerful, headstrong women turning by the end to this scared, confused and alone ruin, he invokes sympathy in the audience. It is easy to relate to her once she is taken off her high pedestal and is exposed as a human with feeling. We empathise with her despair as her husband slides away from her and we identify with her for her losing someone she loves so much. Once Shakespeare gives her sensitivity and shows kind qualities such as selflessness, for example by the fact she would take her life rather that burden her husband even more with her worries, we too begin to feel for her. Therefore, the audience are deeply regretful and have hatred towards Macbeth when he gives his uncaring, throw-away-lines, in Lady's Macbeth final mention, which Shakespeare gives him to emphasise her complete loss of authority and an extremely saddening contrast to the courageous, spirited women at the start of the play, "She should have died hereafter." ?? ?? ?? ?? Anna Broadley VC Macbeth Coursework 18/06/08 - 1 - ...read more.

This is a very strong response and considers language, structure and form and how they are used to create certain effects. Consider also how the characters of Macbeth and Lady Macbeth almost swap throughout the play and how as Lady Macbeth becomes weaker Macbeth seems to grow in strength.