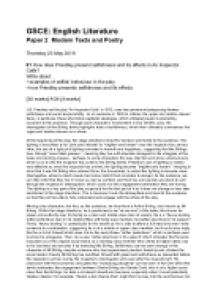 How does Priestley present selfishness and its effects in An Inspector Calls?

Ã¯Â»Â¿GSCE: English Literature Paper 2 Modern Texts and Poetry Thursday 23 May 2019 01 How does Priestley present selfishness and its effects in An Inspector Calls? Write about: â€¢ examples of selfish behaviour in the play â€¢ how Priestley presents selfishness and its effects. [30 marks] AO4 [4 marks] J.B. Priestley set the play â€˜An Inspector Callsâ€™ in 1912, uses two prominent juxtaposing themes - selfishness and social responsibility - to an audience in 1945 to criticise the upper and middle classesâ€™ flaws, in particular, those who follow capitalist ideologies, which ultimately leads to promoting socialism to the audience. Through each characterâ€™s involvement in Eva Smithâ€™s case, the interrogation of the Birling family highlights traits of selfishness, which then ultimately summarises the upper and middle classes as a whole. At the beginning of the play, the stage directions bring this trait just very faintly to the audience. The lighting is described to be â€œpink and intimateâ€ to â€œbrighter and harderâ€ once the inspector has arrived. Here, the use of a light pink lighting connotes to warmth and happiness, suggesting that the Birlings lives through â€œrose-tinted glassesâ€ - meaning they live with absolute disregard to the struggles of the lower and working classes - perhaps, to some characters this was intention and done unconsciously, which is as to why the inspector has come to the Birling family. Priestleyâ€™s use of lighting is indeed very effective as once the inspector has arrived, the lighting became â€œbrighter and harderâ€ - keeping in mind that it was Mr Birling who ordered Edna, ...read more.

He continues to reject social responsibility throughout the interrogation and even becomes cheerful after finding out that the inspector wasnâ€™t real. Similar to Mr Birling but even worse, Mrs Birling firmly refuses to accept responsibility throughout the whole interrogation - even from the start. Her hypocrisy and prejudiced attitudes towards the lower classes highlights the selfishness of the upper classes for, again, better social reputation and wealth. Mrs Birling, as revealed, works as the Head of the Womenâ€™s Charity Organisation, which connotes her as a caring and kind-hearted middle class woman who would help â€œwomen in distressâ€. However, in reality, she is there to work to gain a good reputation for the family. We are unsure of how many women her business had helped but, with Evaâ€™s situation, clearly she had made an unsupportive decision and therefore very hypocritical of her to do so, receiving more negative attention from the audience. The selfishness comes when Mrs Birling reveals that she â€œwasnâ€™t satisfied with the girlâ€™s claimâ€ as â€œSheâ€™d impertinently made use of our nameâ€, suggesting that Mrs Birling believed choosing her familyâ€™s reputation over this girlâ€™s life and the babyâ€™s potential life was a better way to go. In addition, she made her actions look even worse as she constantly refuses to accept responsibility, stating that she was â€œperfectly justified in advising her committee not to allow her claim for assistance.â€ This emphasises her lack of sympathy and remorse over the girlâ€™s death, simply because she used her family name, which seemed to have offended Mrs Birling. ...read more.

However, he â€œliked herâ€, in which could be him feeling compassionate towards her. Afterwards, he justifies as to why, â€œshe was a pretty good sportâ€, which shows that he only valued her as she was obedient because Eric was one) drunk and â€œin a state when a chap easily turns nasty - and I threatened to make a row.â€ and two) he was wealthy, which at that time meant more power and authority. It is selfish in this way considering his abuse of power to make Eva comply to only his s****l desires, where consent was not given. Furthermore, he stole money to support her after his own actions, stating that he â€œinsisted on giving her enough money to keep her goingâ€, but, despite showing compassion and sympathy, this solution will not help her mental and emotion state, which shows a lack of care and maturity; he believes money can solve everything. However, unlike Gerald, Eric learns that his actions were indeed selfish and accepts responsibility throughout the okay after he has been interrogated. Overall, most characters, before, during and after their part of the interrogation, showed signs of selfishness, especially in their involvement in Evaâ€™s suicide case. The older generation and younger generation seem to have separate thoughts after: the older generation (Mr and Mrs Birling, and Gerald) does not learn of social responsibility and refuses to accept the blame for their part in Evaâ€™s case; the younger generation (Sheila and Eric) quickly learns of social responsibility and accepts the fact they are to blame for Evaâ€™s suicide along with the older generation. ...read more.