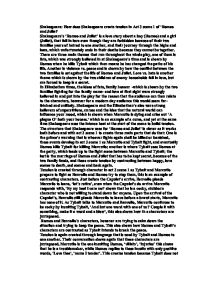 Shakespeare: How does Shakespeare create tension in Act 3 scene 1 of 'Romeo and Juliet' Shakespeare's 'Romeo and Juliet' is a love story about a boy (Romeo) and a girl (Juliet), that fall in love even though they are forbidden because of their two families years of hatred to one another, and their journey through the highs and lows, which unfortunately ends in their deaths because they cannot be together. There are three main themes that run throughout the whole play, one of them is fate, which was strongly believed in at Shakespeare's time and is shown by Romeo when he kills Tybalt which then means he has changed the paths of his life. Another is violence vs. peace and is shown by how the conflict between the two families is set against the life of Romeo and Juliet. Love vs. hate is another theme which is shown by the two children of enemy households fall in love, but are forced to keep is a secret. In Elizabethan times, the ideas of fate, family honour -which is shown by the two families fighting for the family name- and love at first sight were strongly believed in and put into the play for the reason that the audience can then relate to the characters, however for a modern day audience this would seem far-fetched and unlikely. ...read more.

As Tybalt talks to Mercutio and Benvolio, Mercutio continues to be cocky by insulting Tybalt, 'And but one word with one of us? Couple it with something, make it a word and a blow', this also shows how the characters are juxtaposed. Romeo and Benvolio's characters, however are trying to calm down the situation and trying to keep the peace. This also shows how Romeo and Tybalt's characters are contrasted as Tybalt intends to break the peace. Tension is again created through language that is used by Tybalt and Romeo to one another. Their conversation shows again that these characters are juxtaposed, Mercutio is the one insulting Romeo, 'villain', 'injuries' this shows that he is a troublemaker, while Romeo replies to these insults with only positive words, 'Love thee', 'name I tender'. This creates tension because Tybalt does not know the reason why Romeo is doing this, although the audience do, which is an example of dramatic irony. The audience is also kept in suspense to see if Romeo's language can calm down the situation, meanwhile as this is going on, Mercutio is being wound up and getting more and more angry because of Romeo refusing to fight Tybalt as Mercutio thinks Romeo is weak by just taking the insults. ...read more.

The stage directions creates tension again when Tybalt stabs Mercutio, 'Tybalt under Romeo's arm thrusts Mercutio in'. At this point the audience are kept in suspense as we wonder if Mercutio is hurt, how badly and what will now happen to Tybalt. Literary devices are used to create tension in act 3 scene 1 through Lady Capulet's carefully worded speech which uses iambic pentameter and interjections, 'O'. This shows that she is grieving over the death of her nephew, Tybalt as the language 'O' suggests weeping or crying. Through the start of her speech Lady Capulet presents herself as a nice, positive character as she names family members, 'O', my brother's child! O' prince, O' husband', but this soon turns to a sinister ND almost evil language, 'O', the blood is spilled, of dear kingsman. Prince, as thou art true, for the blood of ours shed blood of a Montague'. Here there is use of dramatic irony as Lady Capulet is morning the loss of Tybalt and demands that the blood of a Montague, Romeo must be shed, but she does not know that Romeo is now her son in-law. In conclusion, tension is created throughout act 3 scene 1 through a variety of different ways including stagecraft, language, literary devices, contrasting character and structure. All these techniques are combined to make up the play. ...read more.

I think that the response to the question is done well, with the student regularly linking back to the question- a habit which I have learnt to be very useful in an essay. Regular linking back is not only one of the criterions of a good essay, but it also helps the reader not to diverge from the question and talk about irrelevant things. However, a lot of the essay consists of the student telling the story more than analysing. This is not a good practice as it does not score much marks no matter how long it is, and it becomes difficult when writing other essays which would have a word limit, when it becomes a routine. The essay does not flow well and one skill that is stressed is to conceptualise your response, which not only makes it flow well, but also makes the essay consistent. A good way to do this is to have a thorough plan.

The level of analysis in this essay is good with excellent ideas and breakdown of both single words and phrases. Single word analysis gives the essay more depth, which not only raises the grade boundary but is a great skill to have for any other essays and will also help in many other subjects. However, I feel the essay needs more analysis, as although wherever analysis exists it is excellent, there is not enough. I have noticed on some instances where parts of the play are quoted, but this is also not enough, and more evidence needs to be given, preferably embedded as this gives more marks.

The student uses technical terms, identifying and mentioning many techniques and also explaining the effect which is great. The essay however, as mentioned earlier, does not flow well, and some of the sentences are too long which then makes it confusing and hard to read. This is because by the end of the sentence, it may be that the reader forgets the initial point as it isn't broken up well. Grammar is poor in places, with some typing errors as well. I would suggest a thorough read through before submitting any work. If this is not enough, then I have learnt that asking a friend to read it through for you is also very helpful as they can spot out mistakes that you might have missed out.