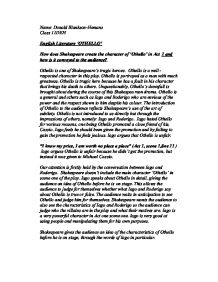 How does Shakespeare create the character of 'Othello' in Act 1 and how is it conveyed to the audience?

Name: Donald Blankson-Hemans Class 11DEH English Literature 'OTHELLO' How does Shakespeare create the character of 'Othello' in Act 1 and how is it conveyed to the audience? Othello is one of Shakespeare's tragic heroes. Othello is a well-respected character in this play. Othello is portrayed as a man with much greatness. Othello is tragic hero because he has a fault in his character that brings his death to others. Unquestionably, Othello's downfall is brought about during the course of this Shakespearean drama. Othello is a general and others such as Iago and Roderigo who are envious of the power and the respect shown to him despite his colour. The introduction of Othello to the audience reflects Shakespeare's use of the art of subtlety. Othello is not introduced to us directly but through the impressions of others, namely: Iago and Roderigo. Iago hated Othello for various reasons, one being Othello promoted a close friend of his, Cassio. Iago feels he should been given the promotion and by failing to gain the promotion he feels jealous. Iago argues that Othello is unfair. "I know my price, I am worth no place a place" (Act 1, scene 1,line 11) Iago argues Othello is unfair because he didn't get the promotion, but instead it was given to Michael Cassio. Our attention is firstly held by the conversation between Iago and Roderigo. ...read more.

Iago to the physical side of marriage, in a very ugly and aggressive way. Iago wants to get Othello arrested for the secret marriage to Desdemona. Shakespeare creates jealousy when Roderigo calls Othello a 'lascivious moor' Roderigo: "To the gross clasps of a lascivious moor" (Act 1,scene 1 line 140) Roderigo becomes r****t again, towards Othello, as the scene progress. During his conversation to Brabantio. Brabantio becomes inflamed with rage because of the s******y suggestive language used by Iago and Roderigo when they convey the news of his daughters marriage. It is important to note however, that whilst Iago and Roderigo are painting a very bleak picture of Othello, they are the same time revealing their own malicious characters. It increasingly becomes clear to the audience that the impressions they create of Othello are but reflections of their own personal interests. Iago is particularly disloyal and is affected in his loyalty to Othello. Iago: "I follow him to serve my turn upon him" (Act 1, scene 1 line 44) In following him, I follow but myself.."... "(Heaven is my judge, not I for love and duty, but seeming so for my peculiar end..."). He is also very manipulative in provoking his close friend Roderigo and Brabantio the senator, for his own selfish purposes. By revealing these negative traits in their character in scene 1, Shakespeare alerts his audience to be objective in their judgement of Othello, long before he actually appears on stage. ...read more.

Othello is described as one of Shakespeare's tragic heroes and the build-up to this emerges as early as Act 1. From the beginning of Act 1 to its end, Othello makes a transition from being a despised, racially and socially substandard character, highly maligned to the audience by other characters in the play even before his appearance. Although that image is gradually but strongly reversed as Act 1 progresses, the audience cannot fail to miss the fatal flaw in the hero's character just before the close of that Act. By entrusting his most loved Desdemona to no other than the disloyal Iago ('Honest Iago', according to Othello) as he leaves for war, Shakespeare creates a classic irony typical of his works. Once again, Othello demonstrates a major fault in his character: that of being far too trusting and utterly ignorant. The manipulative Iago is fully aware of this weakness, and in his soliloquy at the close of Act 1, he recounts, Whilst the famous dramatist leaves his audience totally concerned about the character of Othello, the clear conclusion they can draw from Act 1 is that Othello is an honourable man but possibly one who is far too trusting for others, especially far too trusting of Iago, which makes it very odd that he cannot trust Desdemona. When Iago suggest that she is having an affair with someone else. By the end of Act one, the audience can suspect the flaw in Othello's character. The audience can also see that he as many admirable characteristics. ...read more.