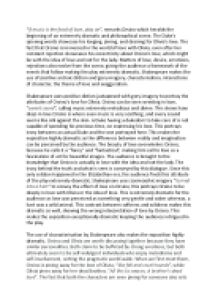 How does Shakespeare make the exposition of Twelfth Night highly dramatic?

Ã¯Â»Â¿â€œIf music is the food of love, play onâ€, remarks Orsino which heralds the beginning of an extremely dramatic and philosophical scene. The Dukeâ€™s opening words showcase his longing, pining, and desiring for Oliviaâ€™s love. The fact that Orsino is immersed in the world of love with Olivia, even after her constant rejection showcases his eccentricity about Orsinoâ€™s love, which might be with the idea of love and not for the lady. Matters of love, desire, emotions, rejections also evolve from the scene, giving the audience a framework of the events that follow making the play extremely dramatic. Shakespeare makes the use of positive archaic diction and gory imagery, characterisation, interactions of character, the theme of love and exaggeration. Shakespeare uses positive diction juxtaposed with gory imagery to portray the attributes of Orsinoâ€™s love for Olivia. Orsino can be seen wresting in love, â€œsweet soundâ€, calling music extremely melodious and divine. This shows how deep in love Orsino is where even music is very soothing, and every sound seems like silk against the skin. ...read more.

The fact that both the characters are seen pining for someone also sets them to be alike. Shakespeare portrays Orsino to be extremely fickle minded too; when Orsino sawâ€œ Olivia firstâ€, â€œ she purged the air of pestilenceâ€ around him and since Orsino believes in love at first sight and the fact that he believes love to be the strongest when fresh. This makes the audience perceive him as extremely dramatic and philosophical, thus making the exposition extremely dramatic. Shakespeare portrays Olivia to have extremely deep connections with her brother as well, â€œTo pay this debt of love but to a brother, How will she love, when the rich golden shaftâ€, which makes Orsino desire Olivia even more. This brings extreme dramatical attributes to the scene making the plot and the exposition exceedingly breath-taking. The use of dialogues also enriches the drama in the scene. Shakespeare uses dialogues to describe the character of Olivia using indirect characterisation. â€œShall not behold her face at ample view. But like a cloistress she will veilÃ¨d walkâ€, showcases Olivia to be bonded emotionally with her brother. ...read more.

â€œAway before me, to sweet beds of flowersâ€, showcases the exaggerated love, where love is perceived as just a bed of flowers and a bed of roses to get. This creates a contrast between truth and imagination. This makes the audience think of Orsino as a dramatic character making the scene dramatic thus making the expository scene dramatic. The use of these devices makes the very first scene extremely dramatical, where audience can feel the connect between them and the characters. This helps Shakespeare keep the audience intrigued in the play. The expository sceneâ€™s high drama potential makes this play extraordinary and fascinating, making the first scene extremely crucial. The achievement of dramatic effects using varied attributes of characters enriches the understanding of the play. The gory imagery and positive diction make Orsinoâ€™s character stand out heightening the drama in the scene and the play. The similar persona between Orsino and Olivia give the play a notion of twist which may further cause chaos, making the future events enigmatic thus heightening the tension. The dialogues help built a direct and indirect persona of the characters, making the play more dramatic from the start. All these dynamics sum up to form the theme of love and desire, disclosing exaggeration as well. ...read more.