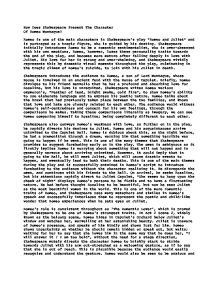 How Does Shakespeare Present The Character Of Romeo Montague?

How Does Shakespeare Present The Character Of Romeo Montague? Romeo is one of the main characters in Shakespeare's play "Romeo and Juliet" and is portrayed as a tragic figure, who is guided by his destiny. Shakespeare initially introduces Romeo to be a romantic sentimentalist, who is over-obsessed with his own emotions. Romeo, however, loses these personality traits towards the end of the play, and becomes more mature after falling deeply in love with Juliet. His love for her is strong and over-whelming, and Shakespeare vividly represents this by dramatic visual moments throughout the play, culminating in the tragic climax of Romeo's suicide, to join with his Juliet in death. Shakespeare introduces the audience to Romeo, a son of Lord Montague, whose House is involved in an ancient feud with the House of Capulet. Briefly, Romeo divulges to his friend Benvolio that he has a profound and absorbing love for Rosaline, but his love is unrequited. Shakespeare writes Romeo various oxymoron's, "Feather of lead, bright smoke, cold fire", to show Romeo's ability to use elaborate language and to express his poetic nature. Romeo talks about the brawl that had previously taken place between the two families, and knows that love and hate are closely related to each other. The audience would witness Romeo's self-centredness and concern for his own feelings, through the comparisons he makes. Taking these comparisons literally as imagery, we can see Romeo comparing himself to Rosaline; being completely different to each other. Shakespeare also conveys Romeo's weakness with love, as further on in the play, he rapidly diverts his desires to Juliet. Romeo and his acquaintances arrive uninvited to the Capulet Ball. Romeo is dubious about this, as the night before, he had a premonition through a dream, warning him that something terrible was going to happen if he went. This is one of the many themes that Shakespeare provides to suggest foreboding early on in the play. ...read more.

Romeo genuinely believes that his dear friend Mercutio is watching him, and he will witness Romeo's performance. In his guilt, Shakespeare shows Romeo to suddenly feel stronger and braver than when Mercutio was alive, in a desperate hope to regain Mercutio's friendship and support. Shakespeare's chosen words for Romeo, his reference to "fortune" brings to light Romeo's belief in destiny and stars foretelling events. Here it is shown by Shakespeare to have an effect on Romeo, and feels that he has dictated what was going to happen, instead of leaving it to fate to decide. Shakespeare reveals Romeo's determination to dictate his own future, during his emotional speech when he finds out from the Friar, that he is banished from Verona, "But I am banished: Hast thou no poison mix'd", and becomes paranoid that he will not be able to see Juliet again. Shakespeare instructs Romeo to ask if the Friar has poison for him to commit suicide with, as he feels it was the worst thing in the world that could happen. This proves to the audience that Romeo is self-centred and Shakespeare makes them aware of Romeo's immaturity and over-theatrical actions that he shows. The audience would believe that it was the best that could happen in the situation, to be banished, and should have seen Romeo relieved that he was not sentenced to be killed, but instead Romeo is portrayed to act as if being banished is worse than death. During Romeo's emotional dialogue, the Friar in the following moments tries to calm Romeo down, and tries to make him see that being banished from Verona was good news. The Friar couldn't understand why this saddened him. Romeo raises his voice to the Friar telling him that he didn't understand and saying that he was, "Taking the measure of an unmade grave". This is one of the times that Shakespeare introduces ambiguity to the play. ...read more.

Shakespeare uses the words "bitter conduct" to describe the sordid act that Romeo must do, and although the poison is foul tasting, it will be a "guide" to Juliet. Romeo sees this as a last resort and thinks that death is the only other option left open to him. Shakespeare makes this a dramatic moment by using quick and hurried lines so that the audience will be wondering towards the end of the play, 'what if...?'. Shakespeare has successfully made this a key dramatic scene, which leaves the audience in awe. Shakespeare in this scene had directed Romeo to come to the tomb and prove his love for Juliet. Hastily, Romeo takes the poison, so he could see Juliet again sooner, but this proves to be regretful, as if he had waited, Juliet would have arisen and both of them would have remained living. Romeo has a complicated and changeable character. His character fluctuates from self-centredness to genuine care and compassion for Juliet. Romeo is absolutely besotted with Rosaline, quickly followed by Juliet. Although Romeo is a romantic dreamer, he is brave and courageous and is willing to fight to the death to avenge his friend. Shakespeare shows Romeo in the beginning of the play to be artificial and self-obsessed. He suffers badly from depression and can be easily despondent and downcast when events dictate. Towards the end of the play however, Shakespeare shows Romeo regaining his maturity, which has been shown fleetingly before, when he becomes determined and looses his foppish manner. His passion and regard for Juliet holds no boundaries and he is ready and willing to commit suicide so that they can be together in death. Romeo never looses his love for Juliet even when circumstances become intolerable. From a callow youth, Romeo changes into a strong-minded brave young man, sincere and genuinely concerned for Juliet's welfare. When all is lost and Juliet appears dead, Shakespeare exhibits Romeo's passion and wish to be with her always, which helps him to end his life, in the knowledge that they will never be parted. ...read more.