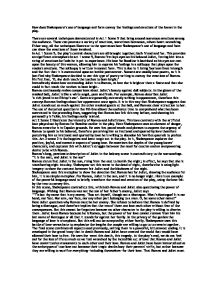 How does Shakespeare's use of language and form convey the feelings and emotions of the lovers in the play.

How does Shakespeare's use of language and form convey the feelings and emotions of the lovers in the play. There are several techniques demonstrated in Act 1 Scene 5 that bring around numerous emotions among the audience. These can promote a variety of reactions, sometimes humorous, others heart-wrenching. Either way, all the techniques illustrate to the spectators how Shakespeare's use of language and form can show the emotions of those involved. In Act 1 Scene 5, the play's central characters are all brought together; both friend and foe. This provides an significant atmosphere In act 1 scene 5, Romeo first lays eyes on his beloved Juliet, forcing him into a string of emotions he feels he is yet to experience. His love for Rosaline is banished as his eyes are cast upon the beauty of this woman, allowing him to express his feelings in a soliloquy that plays upon the readers emotions. The soliloquy is written in sonnet form. This is due to it being fourteen lines in length and the fact that it is constructed upon an iambic pentameter. Sonnets are usually love poems, so it is justified why Shakespeare decided to use this type of poetry writing to convey the emotions of Romeo. ...read more.

"it is the east, and Juliet is the sun" Romeo states that Juliet is the sun, rising from the east to banish the night; in effect, he says that she is transforming night into day. Shakespear set this scene in the dead of night, therefore he is using light imagery to show the contrast between fair Juliet and the blackness of the night. Shakespeare uses this metaphor to show the devotion that Romeo has for Juliet, showing the audience for him, it is no simple metaphor. For Romeo, Juliet is the sun, and it is no longer night. Here is an example of the powerful language used to briefly transform the mood and emotion of the play, using the love felt by the two to convey this. In this scene, Shakespeare contradicts this, with both Romeo and Juliet also questioning the power of language. Wishing that Romeo was not the son of her father's enemy, Juliet says "'Tis but thy name that is my enemy. Thou art thyself, though not a Montague. What's Montague? It is nor hand, nor foot. Nor arm, nor face, nor any other part belonging to a man. O, be some other name!" Here Juliet questions why Romeo must be her enemy. ...read more.

The closing scene has all the powerful forces converging on the tragic set. From beyond the grave the love that Romeo and Juliet had for each other is sufficient to heal the rift between the two families and perhaps through their sacrifice, the world that they left may become a better place. The Prince recognizes this. The irony is that this new world in Verona would have allowed Romeo and Juliet to live and love together. Romeo and Juliet's deaths were inevitable because they were products of the world in which they lived. Over the centuries, Romeo and Juliet have epitomized true love, because they were willing to sacrifice their lives in order not to compromise their love. They are making the statement that their love is not just for this world, but also for all eternity. In conclusion, Shakespeare uses primarily metaphorical language to convey the lovers emotions throughout the play. This allows the audience to become captivated in the passion that is shown, drawing together both sides of the schism of the two families in the concluding lines and proving inevitably that love conquers all. Shakespeare identifies these feeling and expresses them with soliloquies and sonnets, enhancing the experience for the characters and audience alike. ...read more.