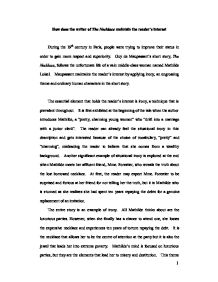 how does the writer of necklace maintains the reader's interest

How does the writer of The Necklace maintain the reader's interest During the 19th century in Paris, people were trying to improve their status in order to gain more respect and superiority. Guy de Maupassant's short story, The Necklace, follows the unfortunate life of a vain middle-class woman named Mathilde Loisel. Maupassant maintains the reader's interest by applying irony, an engrossing theme and ordinary human characters in the short story. The essential element that holds the reader's interest is irony, a technique that is prevalent throughout. It is first exhibited at the beginning of the tale when the author introduces Mathilde, a "pretty, charming young women" who "drift into a marriage with a junior clerk". The reader can already feel the situational irony in this description and gets interested because of the choice of vocabulary, "pretty" and "charming", misleading the reader to believe that she comes from a wealthy background. Another significant example of situational irony is explored at the end when Mathilde meets her affluent friend, Mme. ...read more.

When she loses her friend's expensive necklace and experiences extreme poverty, instead of being angry at her carelessness, she "dream of the long-distant evening when she had been the Belle of the Ball". Mathilde Loisel does not consider how vain and juvenile she is, she is merely riddled by how life works, "How strange life is, how changeable! What small things make the difference between safety and disaster!" She strongly believes that the misfortune is inescapable destiny instead of negligence that could have been avoided. The audience is interested in this protagonist because she is a typical lady in a society who loves to fit in a higher social class and blames her faults on someone else. By studying this character, the reader can compare Mathilde to himself and continuously remind himself not to follow her attitude. On the other side of the coin, Mr. Loisel is a totally different person. He is satisfied and enjoys his present simple life. This contrast to his wife's narcissistic personality can be spotted at the beginning of the story when they are having dinner, "'Ah! ...read more.

These two characters represent two prevalent personalities that average people like the audience have, which is the major reason why they are appealing. Pride is the last element that holds the audience's interest. Pride is a sense of one's own dignity or value. Mathilde Loisel's pride only comes from her beautiful appearance and she craves even more pride through owning luxurious items, "she felt that luxuries and soft living were her natural birthright". This gains her one night of contentment, but also triggers ten years of depression. If she gave up her pride and was honest with her friend, she would have avoided enduring poverty for the next ten years, but she chose to preserve her pride and thus inviting her fate. Everyone has different forms of pride and the readers can effortlessly envisage themselves as Mathilde Loisel again because they all have experienced the pleasure and misery that pride brings. Through this story, they remember numerous episodes involving pride. In conclusion, Guy de Maupassant uses irony, ordinary protagonists and the theme of pride to make the unfortunate life of vain Mathilde Loisel interesting and worth reading. ?? ?? ?? ?? 1 ...read more.