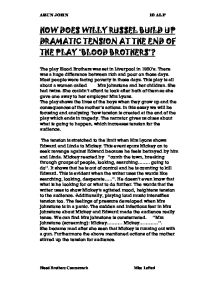 HOW DOES WILLY RUSSEL BUILD UP DRAMATIC TENSION AT THE END OF THE PLAY 'BLOOD BROTHERS'? The play Blood Brothers was set in Liverpool in 1950's. There was a huge difference between rich and poor on those days. Most people were facing poverty in those days. This play is all about a women called Mrs Johnstone and her children. She had twins. She couldn't afford to look after both of them so she gave one away to her employer Mrs Lyons. The play shows the lives of the boys when they grow up and the consequences of the mother's actions. In this essay we will be focusing and analysing 'how tension is created at the end of the play which ends in tragedy. The narrator gives us clues about what is going to happen, which increases tension for the audience. The tension is stretched to the limit when Mrs Lyons shows Edward and Linda to Mickey. This event spurs Mickey on to seek revenge against Edward because he feels betrayed by him and Linda. ...read more.

The role of the narrator is to emphasise the superstition of the twins and to keep the audience interested. The tension is stretched to the limit when the narrator enters the stage and says ''you know the devil's got your number, you know he is right beside you .............. Today, Today, TODAY'' This is significant because in the beginning of the play the narrator said ''you know the devil's got your number ....... He wants to speak to you ......seen him leaning on your door''. However now, the focus is in last 'TODAY' is in capital letter emphasises this point even more. Another example of this is when the narrator sings the song 'madman'. As he repeats the lyrics over and over the suspense would build and also the theme of superstition is also repeated and reinforced. Also by using pulsating music the tension is heightened. ''There is a man gone mad in the town ......... ...read more.

There were some special effects used through out the play, the main one was the gun shot, this loud sudden bang came after some moments of quietness. When Mrs Johnston enters on to the stage she rushes to Mickey and Edward and tells Mickey ''don't shoot Eddie he is your brother. You....of you away'', this creates dramatic tension because Mickey is out of control and he has a gun. When Mrs Johnston told their sons that they were brothers Mickey realises what sort of life he could have had and he could have been. This made him feels he could be give away. By telling the truth Mrs Johnston actually thought she was helping the situation perhaps that caused both her son's deaths. I strongly believe, that was successful in creating dramatic tension and suspense throughout the play. By adding another character may make the audience think that Mickey will become even more confused and this may lead to the death of other characters. By Arun John 10 ALP Blood Brothers Coursework Miss Lefteri ?? ?? ?? ?? ARUN JOHN 10 ALP Blood Brothers Coursework Miss Lefteri ...read more.

This is a drama question about the creation of tension in the play 'Blood Brothers. This candidate gives a strong response to the question with consistent focus on how Willy Russel uses dramatic techniques such as foreshadowing and direct address ...

This is a drama question about the creation of tension in the play 'Blood Brothers. This candidate gives a strong response to the question with consistent focus on how Willy Russel uses dramatic techniques such as foreshadowing and direct address to create tension leading to the climax where Mickey and Edward confront each other.

The Level of Analysis is somewhat buried beneath the candidate trying to re-tell the story, though ignoring the content that gains no marks, there is sufficient quality content here to achieve a middle B. The candidate has addressed a number of different technique from the source text which illustrate how Russel manipulate the audience to create tension.
The key in this question is the effect on the audience. The audience should be constantly referred to when making points about how the tension is built, as it is, at all times, a drama for an audience, and the audience that are feeling the tension. The candidate does this sometimes, though a more explicit reference would earn more marks.
The ways the candidate comments on the stage directions as well as certain quotes from the text is also good because it shows an ability to look at exactly what the playwright intended, rather than what they are trying to subliminally convey. Also, the attention to how language shapes tension (Such as when the police officer addresses Mickey and "Michael") shows an astute awareness of less obvious dramatic techniques.

The Quality of Written Communication is good. It's not perfect because the quotes the candidate makes are sloppy, and the excessive and unnecessary use of ellipses when quoting lose the candidate marks because they are not adhering to the standard ellipsis format (three successive dots), but also because there are a few spelling mistake and grammatical inefficiencies.