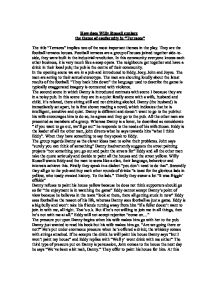 How does Willy Russell explore the theme of conformity in &amp;#147;Terraces&amp;#148;?

How does Willy Russell explore the theme of conformity in "Terraces" The title "Terraces" implies two of the most important themes in the play. They are the football terraces houses. Football terraces are a group of houses joined together side-to-side, they were built in the industrial revolution. In this community everyone knows each other business, it is very much like a soap opera. The neighbours get together and have a drink in their local pub; the pub is the centre of their community. In the opening scene we are in a pub and introduced to Eddy, Joey, John and Joyce. The men are acting to their sexual stereotype. The men are shouting loudly about the latest results of the football. "They hack him down" the language used to describe the game is typically exaggerated imagery is connected with violence. The second scene in which Danny is introduced contrasts with scene 1 because they are in a noisy pub. In this scene they are in a quiet family scene with a wife, husband and child. ...read more.

Willy Russell wants Eddy and the men to seem like a clan, their language, behaviour and interests achieve this. Firstly they speak in a dialect "you don't need to do that". Secondly they all go to the pub and buy each other rounds of drinks "a toast for the glorious lads in yellow, who toady created history. To the lads." Thirdly they swear a lot "It was friggin' offside" Danny refuses to paint his house yellow because he does not think supporters should go so far "the enjoyment is in watching the game" Eddy cannot accept Danny's point of view because he believes in the team "look at them, there all getting stuck in now" Eddy sees football as the reason of his life, whereas Danny sees football as just a game. Eddy is a big bully and won't take his friends turning away from him "if a feller doesn't want to join in with me, all right. That's o.k. But if he's not willing to join me in all things, then he's not with me at all." ...read more.

Next the pressure takes a sinister turn; a threat is delivered through the letterbox of his house "this is a warning! Paint or finds somewhere else to live!" Danny responds by getting so angry, he hurls the paint across the street and down the drain. To make matters worse Susan threatens to leave the house until it has been painted "Well he'd better do something about it or he'll be the only one living here." When his friends start painting his house. In scene sixteen the pressure reaches a climax, Susan leaves and says "I'll come back Danny when it's painted." Eddy and his friends tie Danny to a kitchen chair and start painting his house. "Danny sits in the chair, slaughtered" This means he is devastated by what his mates have done to his house. Finally the play ends with this dramatic climax. The audience know that he is broken. But Eddy is totally unaware of the affect of his behaviour. He says, "don't forget your pint Danny lad." The theme of madness runs throughout the play. He is constantly called mad or warped through the play, this is very hard for him to keep his sanity. ...read more.