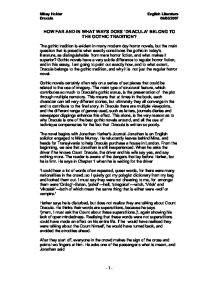 HOW FAR AND IN WHAT WAYS DOES 'DRACULA' BELONG TO THE GOTHIC TRADITION?

HOW FAR AND IN WHAT WAYS DOES 'DRACULA' BELONG TO THE GOTHIC TRADITION? The gothic tradition is evident in many modern day horror novels, but the main question that is posed is what exactly constitutes the gothic in today's literature, as distinguishable from mere horror fiction, and what makes it superior? Gothic novels have a very subtle difference to regular horror fiction, and in this essay, I am going to point out exactly how, and to what extent, Dracula belongs to the gothic tradition, and why it is not just the regular horror novel. Gothic novels certainly often rely on a series of set pieces that could be related to the use of imagery. The main type of structural feature, which contributes so much to Dracula's gothic status, is the presentation of the plot through multiple narrators. This means that at times in the book, each character can tell very different stories, but ultimately they all converge in the end to contribute to the final story. In Dracula there are multiple viewpoints, and the different range of genres used, such as letters, journals diaries and newspaper clippings enhance this effect. This alone, is the very reason as to why Dracula is one of the best gothic novels around, and all the use of technique compensates for the fact that Dracula is written so poorly. ...read more.

Jonathan soon discovers he has made a mistake. Bram Stoker uses gothic imagery to describe Jonathans fear when he discovers, 'doors, doors, doors everywhere, and all locked and bolted. In no place save from the windows in the castle walls is there an available exit' Harker quickly learns that Dracula is more than he says, especially after he is bitten, and his immature attitude changes. One morning, as Harker looks frantically around the castle for an escape hatch, he stumbles upon a room where a number of coffins of earth are stored. In an eerie gothic scene, Jonathan looks underneath the cover of one of the coffins, and finds Dracula. Jonathan thinks he is dead, but again gothic tradition comes into it, because a main element of gothic text is irony. Really, we know that Dracula can be dead and alive at the same time, because he is a vampire, but Jonathan does not yet know of this, disregarding all these happenings as superstitions. That night, Dracula appears alive as usual, and Jonathan now suspects something supernatural about his host. Harker remains trapped in the castle as he observes Count Dracula loading his coffins. Eventually, Jonathan escapes from the castle, on the verge of sanity. ...read more.

The character Renfield is extremely complicated, and mysterious, and he actually contributes a lot to Draculas status of belonging to the gothic tradition. In Dr. Seward's diary, he writes 'I am puzzled afresh about Renfield. His moods change so rapidly that I find it difficult to keep touch with them, and as they always mean something more than his well being, they form a more than interesting study. This morning, when I went to see him after his repulse of Van Helsing, his manner was that of a man-commanding destiny. He was in fact commanding destiny--subjectively. He did really care for any of the things of mere earth; he was in the clouds and looked down on all the weaknesses and wants of us poor mortals.' The gothic image of Renfield looking down from the cloud 'on all the weakness and wants of us poor mortals' continues to add to the horror in the novel. The use of dark imagery, and grisly language adds to the gothic scenery, and it is soon easy to see why Bram Stoker's novel is the most widely read of all time. Stoker converges his vast knowledge of science, sexuality of the Victorian times, modernity, religion and most of all superstition, and created, without doubt, a novel that will always belong to the gothic tradition. ?? ?? ?? ?? Mikey Holder English Literature Dracula 09/05/2007 - 1 - ...read more.