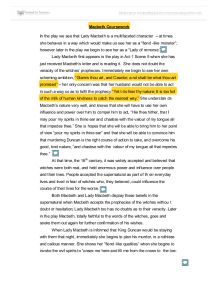 How far can the audience sympathise with Lady Macbeth?

Macbeth Coursework In the play we see that Lady Macbeth is a multifaceted character - at times she behaves in a way which would make us see her as a "fiend-like monster"; however later in the play we begin to see her as a "Lady of remorse." Lady Macbeth first appears in the play in Act 1 Scene 5 when she has just received Macbeth's letter and is reading it. She does not doubt the veracity of the witches' prophecies. Immediately we begin to see her own scheming ambition, "Glamis thou art, and Cawdor; and shalt be what thou art promised" - her only concern was that her husband would not be able to act in such a way so as to fulfil the prophecy "Yet I do fear thy nature; It is too full of the milk of human kindness to catch the nearest way." She understands Macbeth's nature very well, and knows that she will have to use her own influence and power over him to compel him to act, "Hie thee hither, that I may pour my spirits in thine ear and chastise with the valour of my tongue all that impedes thee." She is hopes that she will be able to bring him to her point of view "pour my spirits in thine ear" and that she ...read more.

Lady Macbeth has planned out the murder to the smallest detail, but Macbeth subverts this by returning with the "b****y daggers'. He, traumatized by the experience and is unable to return to Duncan's chambers, "I'll go no more: I am afraid to think what I have done; Look on 't again I dare not." Lady Macbeth is angry and decides to go back herself, "Infirm of purpose! Give me the daggers. The sleeping and the dead but are as pictures." It is here that Lady Macbeth again demonstrates her own inhumanity. She is able to separate herself from the reality of a sleeping king, a human being, living, with friends and family, and view the sleeping "but as pictures". At the same time she appears to be the dominant one, giving Macbeth orders and instructions, "Go get some water and wash this filthy witness from your hand." However it is in this scene that she shows some glimmer of compassion and humanity - the only thing stopping her doing the deed herself was that Duncan bore a resemblance to her father, "had he not resembled my father as he slept, I had done't." When Macbeth tells her in this scene that he could not say "amen" as the guards were praying he is making another reference to the beliefs of the time, that those who were possessed by the devil showed an inability to pray. ...read more.

There would have been a time for such a word." His only thought on the death of his wife is that it would have been more convenient for her to have died later, or, more likely, that her death was untimely, premature. In the last scene of the play we are informed by Malcolm that Macbeth's "fiend-like" queen had taken her own life. We can only assume that it was her feelings of guilt and remorse that drove her to it, as her doctor commented, "Unnatural deeds do breed unnatural troubles." In conclusion, it appears that in the first half of the play, lady Macbeth is portrayed as a "fiend-like monster", but as we move into the second part of the play her behaviour begins to change and we see her portrayed, somewhat, as a "lady of remorse". We can clearly see the downfall and deterioration of her character, how she begins to lose control over her life, and how her relationship with her husband begins to fall apart. I believe, however, that Lady Macbeth's displays of remorse are not entirely genuine. Her regret only begins to be displayed when her ambitions for Macbeth are not realised, "Naught's had, all's spent." Her failure, both moral and worldly, ultimately leads to her suicide. I do not believe she deserves our compassion or pity - her moral poverty is too great, and her remorse too contemptible. ...read more.

Shows understanding of Lady Macbeth's character with textual support. Lacking in empathy for her character. Some references to language.