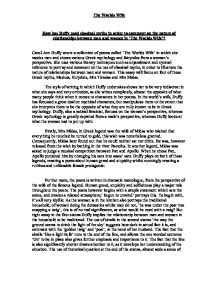 How has Duffy used classical myths in order to comment on the nature of relationships between men and women in The Worlds Wife(TM)?

How has Duffy used classical myths in order to comment on the nature of relationships between men and women in 'The Worlds Wife'? Carol-Ann Duffy wrote a collection of poems called 'The Worlds Wife' in which she mocks men and shows various Greek mythology and fairytales from a woman's perspective. She uses various literary techniques such as enjambment and cynical reference to portray and comment on the use of classical myths, in order to illustrate the nature of relationships between men and women. This essay will focus on four of these Greek myths, Medusa, Eurydice, Mrs Tiresias and Mrs Midas. The style of writing in which Duffy undertakes shows her to be very indiscreet in what she says and very orthodox, as she writes completely, almost the opposite of what many people think when it comes to characters in her poems. In the world's wife, Duffy has focussed a great deal on mythical characters, but manipulates them to the extent that she interprets them to be the opposite of what they are truly known to be in Greek mythology. Duffy, also a radical feminist, focuses on the woman's perspective, whereas Greek mythology is greatly depicted from a male's perspective, whereas Duffy looks at what the women had to put up with. Firstly, Mrs Midas, in Greek legend was the wife of Midas who wished that everything he touched be turned to gold, this wish was nonetheless granted. Consequently, Midas later found out that he could neither eat nor drink. He was, however released from the wish by bathing in the river Pactolus. In another legend, Midas was asked to judge a musical competition between Pan and Apollo. When he chose Pan, Apollo punished him by changing his ears into asses' ears. Duffy plays on both of these legends, creating a poem about human greed and stupidity whilst cunningly creating a ruthless and unlikeable female protagonist. ...read more.

The poem then seems to have reached its climatic moment, as this section is clearly separated from the next by an asterix. In addition, the following stanza, after the rather large gap, opens with a positive statement 'life has to go on'. She seems to be coping with this, whereas at this point Mrs Midas was out the door and wanted nothing more to do with her husband. There is however a suggestion of Mrs Tiresias' determination to maintain a sense of balance, a normality that would enable them to be as normal and as they were before (a couple). At this point the contrast is beginning to be observed, as before the man was the 'master' but now he has become vulnerable, as he is experiencing something which is beyond his control and he would have to overcome. Here the relationship status also changes gradually, from being a 'wife' to more of a 'sister', as he is undergoing woman experiences, and the only person he can turn to is his wife. The sense of female bonding and a suggestion of a relationship built on new terms, in the presence of entirely different circumstances. She extraordinary still remains calm and begins to get into a more intimate sense with her husband, as she holds 'his soft new shape, in (her) arms all night'. The language here is also gentle as the graduation from the man becoming feminine, this also increases the bonding between them and brings the two closer, as there is ore connection between them, the love between them of marriage and the feminine side as well, so she can relate to him more now. However, the disbelief of the following issue, would be a surprise to anyone, and deservedly needs a separate line for itself. This is to put across the sheer shock involved with the statement and creating division that now occurs between the couple also. ...read more.

Furthermore, the last poem in which Carol Ann Duffy uses and manipulates the mythical character from, Greek mythology is Eurydice. In this poem she has completely changed the story around, so that Eurydice doesn't want to go back with her former lover Orpheus, and is seen to dislike him in the poem. She refers to 'girls' on various occasions, which could interpret into the fact that it could be showing her sexist point of view and showing her specifically talking to girls. She talks of being happy in the underworld when she says 'it suited me down to the ground' emphasising indirectly how she loathed being with Orpheus in the real world. She also uses short sentences such as 'Him. Big O' and this creates a mocking and sarcastic tone. Duffy uses rhyme, which adds a warped humorous touch when it says 'deceased, I was resting in peace. Late, past my sell by date'. Duffy then adds a crude ending where she says 'What else? I noticed he hadn't shaved. I waved once and was gone.' This reflecting that he isn't really important. Another interpretation could be that it is Duffy's view that women don't need men, and this is probably an overall ideology for the majority of poems she has written by using Greek mythology. To conclude, Duffy uses various ways in order to comment on the relationships between men and women in 'The World's Wife' using classical myths. By looking at the poems stated above, Mrs Midas, Mrs Tiresias, Medusa and Eurydice, all have one thing or another in common; whether it is that the men in the poem have lost power or whether the woman (Medusa) has lost power. All could be the view of Duffy, and how she feels that women do not need men and this statement could be the overall ideology and motives for writing these poems, by manipulating Greek myths in order to put together this ideology in her poems. ?? ?? ?? ?? The Worlds Wife ...read more.

This is a very good analytical essay that explores a variety of links between texts. Always ensure once a technique has been identified its effects are explained and carefully check expression before submitting work.