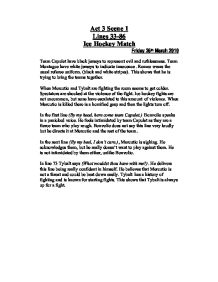 Act 3 Scene 1 Lines 33-86 Ice Hockey Match Friday 26th March 2010 Team Capulet have black jerseys to represent evil and ruthlessness. Team Montague have white jerseys to indicate innocence. Romeo wears the usual referee uniform. (black and white stripes). This shows that he is trying to bring the teams together. When Mercutio and Tybalt are fighting the room seems to get colder. Spectators are shocked at the violence of the fight. Ice hockey fights are not uncommon, but none have escalated to this amount of violence. When Mercutio is killed there is a horrified gasp and then the lights turn off. In the first line (By my head, here come team Capulet.) Bonvolio speaks in a panicked voice. He feels intimidated by team Capulet as they are a fierce team who play rough. ...read more.

Gentlemen, good den: a word with one of you. MERCUTIO And but one word with one of us? Couple it with something; make it a word and a blow. TYBALT You shall find me apt enough to that, sir, an you will give me occasion. MERCUTIO Could you not take some occasion without giving? TYBALT Mercutio, thou consort'st with Romeo,-- MERCUTIO Consort! what, dost thou make us minstrels? And thou make minstrels of us, look to hear nothing but discords: here's my hockey stick; here's that shall make you figure skate. 'Zounds, consort! BENVOLIO We talk here in front of spectators: Either withdraw unto the changing rooms, And reason coldly of your grievances, Or else depart; here all eyes gaze on us. MERCUTIO Men's eyes were made to look, and let them gaze; I will not budge for no man's pleasure, I. ...read more.

MERCUTIO O calm, dishonourable, vile submission! Alla stoccata carries it away. Draws Tybalt, you rat-catcher, will you fight? TYBALT What wouldst thou have with me? MERCUTIO Good king of cats, nothing but one of your nine lives; that I mean to make bold withal, and as you shall use me hereafter, drybeat the rest of the eight. Will you pluck your stick out of his pitcher by the ears? make haste, lest mine be about your ears ere it be out. TYBALT I am for you. Drawing ROMEO Gentle Mercutio, put thy stick up. MERCUTIO Come, sir, your passado. They fight ROMEO Draw, Benvolio; beat down their sticks. Gentlemen, for shame, forbear this outrage! Tybalt, Mercutio, the prince expressly hath Forbidden bandying in Verona stadiums: Hold, Tybalt! good Mercutio! Mercutio falls and Tybalt becomes out of control, because of Romeo. Tybalt's skate digs into Mercutio' stomach. ...read more.