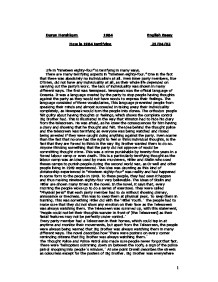 Doron Hershkorn 1984 English Essay How is 1984 terrifying 25/04/02 Life in "nineteen eighty-four" is terrifying in many ways. There are many terrifying aspects in "nineteen eighty-four." One is the fact that there was absolutely no individualism at all. Even inner party members, like O'Brien, did not have any individuality at all, as their whole life depended on carrying out the party's work. The lack of individuality was shown in many different ways. The first was Newspeak. Newspeak was the official language of Oceania. It was a language created by the party to stop people having thoughts against the party as they would not have words to express their feelings. The language consisted of three vocabularies, This language prevented people from speaking their minds and almost succeeded in taking away their individuality completely, as Newspeak would turn the people into clones. The orthodox people felt guilty about having thoughts or feelings, which shows the complete control Big Brother had. This is illustrated in the way that Winston had to hide his diary from the telescreen. He was afraid, as he knew the consequences for him having a diary and showing that he thought and felt. The idea behind the thought police and the telescreen was terrifying as everyone was being watched and risked being arrested if they were caught doing anything against the party. ...read more.

feed him, but moments after guards came in to take the inmate who was given the bread immediately betrayed the man who gave him the bread. Telling the guards to take him (chinless) to room 101 instead. This would have surely pleased Big Brother, as the eradication of friendship would be the party�s main goal. When the request was not replied, the man pleaded that they rather slit throat of his wife and all his children than send him to room 101. This man was betraying his own family members. This would have pleased Big Brother. People came to the conclusion that one could not trust anybody in fear that they would report them to the thought police, where one would be vaporised. This was true when dealing with people�s families. In the ministry of love when Winston meets Parson who tells him how his daughter betrayed him when she heard him talking of overthrowing the party in his sleep. Other families were destroyed by the loss of respect between parents and children. People were refusing to obey their parents, as Big Brother encouraged them to do. The relationships between lovers were also controlled by the party, as they annihilate all the pleasures and desires of having s*x and even promote artificial insemination. The party did not like s*x as when two people share the experience they begin to love each other. ...read more.

It was easy for Big Brother to make the people do this, as the people could not remember what life was like without a ruler (like Big Brother) to tell them what to do. Big Brother eliminated the past by destroying records and rewrote it. People, especially party members could not have memories. They were completely under Big Brother�s control. In conclusion there are many terrifying aspects, but none more terrifying than the other is. Each is terrifying in it�s own way and all point to the fact that most of these things did, could have, and could still happen. Orwell realised this and that inspired him to write an 'account of the future� which is what "nineteen eighty-four" was to him and others living in 1949. Although terrifying now, these things would have been more terrifying in 1949, because, the things Orwell described had happened to them in some form. For example, the threats of labour camps, them being told that the Jews (Goldstein) were the enemy, capitalist dictatorship. So this book would have been the terrifying reality to the people of that time. At the time this novel was written, the Russian revolution and World War II was the reality and these things were happening in Russia. So in answer to the question, this novel would have been much more terrifying in 1949, because to them this book was real life. ?? ?? ?? ?? 1 ...read more.