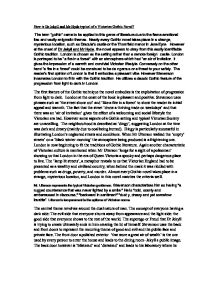 How is Dr Jekyll and Mr Hyde typical of a Victorian Gothic Novel?

How is Dr Jekyll and Mr Hyde typical of a Victorian Gothic Novel? The term "gothic" came to be applied to this genre of literature due to the fierce emotional ties and vastly enigmatic themes. Nearly every Gothic novel takes place in a strange, mysterious location, such as Dracula's castle or the Thornfield manor in Jane Eyre. However at the onset of Dr Jekyll and Mr Hyde, the novel appears to stray from this easily identifiable Gothic tradition. London is chosen as the setting rather than a remote foreign castle. London is portrayed to be "a fire in a forest" with an atmosphere which had "an air of invitation. It gives the impression of a warmth and convivial Victorian lifestyle. Conversely on the other hand "a fire in a forest" could be construed to be dangerous or a threat to your safety. The reader's first opinion of London is that it embodies a pleasant vibe. However Stevenson incarnates London to fit in with the Gothic tradition. He utilizes a classic Gothic feature of the progression from light to dark in London. The first feature of the Gothic technique the novel embodies is the exploitation of progression from light to dark. London at the onset of the book is pleasant and positive. ...read more.

Stevenson uses the back and front doors to represent the recurring theme of good and evil and the public face and private face. The front door a polished exterior 'that wore a great air of wealth' is the one used by every person to enter the house and leads to the dining room- Jekyll s public image. The back door however is 'blistered' and 'distained' and leads to his laboratory where he releases Hyde. The back door signifies the hidden evil in all of us. Jekyll declares that "man is not truly one, but truly two", suggesting his own understanding of the duality. In the nineteenth-century the strict divide between middle/upper class and working class was vast. The British Empire had to show the world that they brought prosperity and civilisation to the countries they invaded so fine living for the rich and morality for upper class was a necessity. Mr Utterson being a prime example of showing his light in public and keeping his dark in private. He is fond of wine but 'drinks gin when he's alone, to mortify his taste for vintages' suggests he doesn't want others to see his true identity and the fact that he is an alcoholic. ...read more.

The changes in weather heighten tension and anxiety. For instance a dark and evil atmosphere is created in the scene when Pool and Utterson ready themselves to break in to Dr Jekyll's lavatory because the wind causes the clouds to cover the moon. Stevenson uses the weather to reflect an evil environment and what the characters are feeling. The evil side of Jekyll not only grows physically but grows inside of him. All this like an allegory for opium addiction which was a real problem in Victorian times. Jekyll becomes increasingly addicted to his "id" and Hyde becomes stronger throughout because of it. Dr Jekyll overstepped the mark just like Victor Frakenstein goes too far in creating a monster. Man is not meant to have the "spark of being" or the "instruments of life". God is the only creator and destroyer. Dr Jekyll and Victor Frankenstein both strayed into the territory of God.... and both were punished. Stevenson wanted to point out to everyone the hypocrisy of the Victorian society. He satirises the split personality of Victorian society. The gulf between the rich and poor and how Victorians hid the dark underbelly that the outside world could not see. He wanted to emphasize the fact that there is good and bad in everyone and used many symbols to stress the point. ...read more.