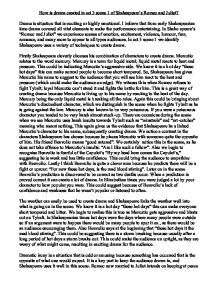 How is drama created in act 3 scene 1 of Shakespeare(TM)s Romeo and Juliet?

How is drama created in act 3 scene 1 of Shakespeare's Romeo and Juliet? Drama is situation that is exciting or highly emotional. I believe that from early Shakespearian time drama covered all vital elements to make the performance entertaining. In Shakespeare's "Romeo and Juliet" we experience scenes of emotion, excitement, violence, humour, fear, romance, and many more to appear to all types audiences. In act 3 scene 1 we identify Shakespeare uses a variety of techniques to create drama. Firstly Shakespeare cleverly chooses his combination of characters to create drama. Mercutio relates to the word mercury. Mercury is a term for liquid metal; liquid metal reacts to heat and pressure. This could be indicating Mercutio's aggressive side. We know it is a hot day "these hot days" this can make normal people to become short tempered. So, Shakespeare has given Mercutio his name to suggest to the audience that you will see him react to the heat and pressure (which could make the audience on edge). We witness this when Romeo refuses to fight Tybalt; loyal Mercutio can't stand it and fights the battle for him. This is a great way of creating drama because Mercutio is living up to his name by reacting to the heat of the day. Mercury being the only liquid metal is breaking all the rules. ...read more.

In the past attempts to fight authority have failed. The audience know that the Prince has warned them that if the two families were to disturb the streets again their lives would pay the forfeit of peace. This tells the audience that to go against authority again it would need to be a bigger and better reason for doing so. Benvoilio repeats the warning to Mercutio, hoping he would listen to his advice. However Mercutio still doesn't think twice about drawing to Tybalt. This conflict is very exciting for the audience and characters around them as it brings across Mercutio's strong defiant character. In Elizabethan times this would have been a rarity to see someone in broad daylight brake the law so this makes it even more exhilarating. Marriage has to have parent's permission before the age of 18 and is merely illegal before the age of 16. Not only are the parents uninformed that they are married but they aren't yet at the age where they are allowed to be. This is very dramatic for the audience as it is clashing with authority to a very high extent. In the Elizabethan era, if you were English you were expected to be strict Protestant. So to be murdering somebody it wasn't just going against the law of the land it was going against God's law. ...read more.

The Prince who we know has claimed that any more disruption to the streets would result in the death to people in those houses creates the majority of this threat. This produces this atmosphere of threat throughout the scene, as the audience are aware of what could happen. What could happen is that reason why it is so dramatic because the audience become anxious once they empathize with the character on either side. Some threat is also created by the marriage between Romeo and Juliet because of what might happen if they were found out and what impact it would have on the play. It can make the audience on edge, which is why this kind of threat adds to the drama of the whole scene. Having discussed all the elements Shakespeare uses to make "Romeo and Juliet" intensely dramatic we can really understand a lot about Shakespeare and the play itself. Shakespeare having written the play when he was 30 must have remembered precisely what is was like to be a teenager. It's almost like he can still feel the same feelings of love and anger like a 14 year old would because he portrays its so well. I reckon this is why it is so appealing for teenagers and older people alike as they can recover and experience being the age they are or that age again as Shakespeare has interpreted it so well in this play. By Natasha Godfrey 10y1 ...read more.