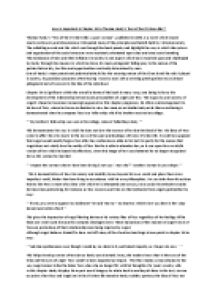 How is important is Chapter 34 to Thomas Hardys Tess of the DUrbervilles?

﻿How is important is Chapter 34 to Thomas Hardy?s Tess of the D?Urbervilles?? Thomas Hardy?s ??Tess of the D?Urbervilles: a pure woman??, published in 1890, is a novel which roused much controversy and dissension as it disputed many of the principles and beliefs held by Victorian society. The unfolding events and the which run through the book parody and highlight the way in which the system and organisation of the social structure were resolutely orientated upon class and ones social standing. The dominance of men and their influence in society is one aspect which too is touched upon and challenged by Hardy through the manner in which he shows his main protagonist falling prey to the nature of the patriarchal society, her fate and opportunities constantly determined by men. One of Hardy?s most potent and polemical attacks lies the uncaring nature of the Church and the role it played in society, its grandiose piousness often leaving it and so God with a seeming predisposition to an almost phlegmatic lack of concern to the fate of the individual. Chapter 34 is significant within the overall scheme of the book in many ways; one being it shows the development of the relationship between and personalities of Angel and Tess. The hypocrisy and naivety of Angel?s character becomes increasingly apparent as this chapter progresses, his often cerebral approach to his love of Tess, where he has an inclination to view her more as an intellectual puzzle than a real being is demonstrated when he compares Tess ...read more.

Other clues notable to the reader is the symbolism which Hardy uses for instance the jewels which Tess wears just before she chooses to relate her past to angle, place in the mind the idea of one being dressed up for sacrifice, such imagery has appeared at earlier points in the book one being Tess having to be dressed up by Joan just as she is about to seek out Alec D?Urberville for the purpose of ?claiming kin. This is of course the start of the point in the book where Tess again meets the charter who brings about her downfall she is made to wear all white by Joan this could be representative of a sacrificial lamb and makes Tess seem almost Christ like, this links back to the imagery and themes of betrayal which become especially evident in chapter 34. The dinner which Angel and Tess eat upon there arrival at the former mansions of the D?Urbervilles seems ominously like the last supper even the point when they share bread or pass between them one cup or else when Angel washes his hands in the basin could be likened to Pontius Pilate washing his hands of Christ before his betrayal, she is then in turn betrayed by Angel. Hardy skilfully creates a sense of foreboding as chapter 34 progresses; there are many indications in the text which are suggestive of how Angel will respond to Tess?s confession: ?? ?And shall I ever neglect her, or hurt her, or even forget to consider her? ...read more.

choosing it from amongst many other names which would have changed his life utterly and perhaps prevented him from meeting a woman who was to kill him. The notions of fate also link in with hardy?s ideas of nature or nurture and the question whether the route and events within a person?s life are predestined or fleeting and variable. This is seen angle says: ??Fine feathers make fine birds; a peasant girl but very moderately prepossessing to the casual observer in her simple condition and attire, will bloom as an amazing beauty if clothed as a woman of fashion with the aids that art can render; while the beauty of the midnight crush would often cut but a sorry figure if placed inside the field woman?s wrapper?? This confirms how little a person?s character or doings affect the life that they have and how rather it is the chance event of the class of the family into which they are born that is the deciding factor. To conclude Chapter thirty four is of great significance to the novel as a whole as it draws together many of the ideas and themes which run through the initial sections of the book as well as setting the stage for the events that follow, showing the sad consequences of earlier occurrences whilst developing a sense of foreboding for what is yet to happen. It too demonstrates Hardy?s use of writing techniques such as irony and symbolism to help indicate the coming events and build tension and suspense. ...read more.