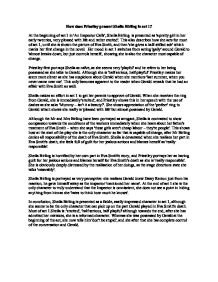 How does Priestley present Sheila Birling in act 1? At the beginning of act 1 in 'An Inspector Calls', Sheila Birling is presented as 'a pretty girl in her early twenties, very pleased with life and rather excited'. This also describes how she acts for most of act 1, until she is shown the picture of Eva Smith, and then 'she gives a half-stifled sob' which marks her first change in the novel. Her mood in act 1 switches from acting 'gaily' around Gerald to 'almost breaks down, but just controls herself', showing she is also the character most capable of change. Priestley first portrays Sheila as na�ve, as she seems very 'playful' and he refers to her being possessed as she talks to Gerald. ...read more.

She shows appreciation of the 'perfect' ring to Gerald which shows she really is 'pleased with life' but almost possessed by Gerald. Although the Mr and Mrs Birling have been portrayed as arrogant, Sheila is contrasted to show compassion towards the conditions of the workers immediately when she hears about her father's treatment of Eva Smith - when she says 'these girls aren't cheap labour - they're people'. This shows how at the start of the play she is the only character so far that is capable of change, after Mr Birling denies all responsibility of the death of Eva Smith. Sheila is devastated when she realises her part in Eva Smith's death, she feels full of guilt for her jealous actions and blames herself as 'really responsible'. ...read more.

At the end of act 1 she is the only character to truly understand that the Inspector is omniscient, she does not see a point in hiding anything from him as she 'hates to think how much he knows'. In conclusion, Sheila Birling is presented as a fickle, easily impressed character in act 1, although she seems to be the only character that can pick up on the part Gerald played in Eva Smith's death. Most of act 1 Sheila is: 'excited', 'half serious, half playful' although towards the end, after she has admitted her mistakes, she is a reformed character. Whereas she was possessed by Gerald at the beginning of the act, she now tells him 'don't be stupid', and she after that she has complete control of the conversation and Gerald. ...read more.

This shows the beginning of a good analysis but there is not enough in depth exploration of the character's role. Even when analysing a particular scene it is important to make links with other points in the play to show how you are considering the context of an act or character within the context whole play.