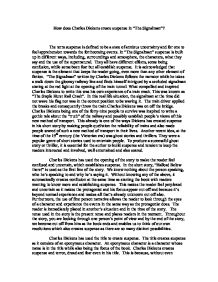 How is suspense created in The Signalman?

How does Charles Dickens create suspense in "The Signalman"? The term suspense is defined to be a state of anxious uncertainty and for one to feel apprehension towards the forthcoming events. In "The Signalman" suspense is built up in different ways, including, surroundings and atmosphere, the characters, what they say and the use of the supernatural. They all have different effects, some being confusion, while some been fear but all establish suspense. It is acknowledged that suspense is the element that keeps the reader going, even more than any other element of fiction. "The Signalman" written by Charles Dickens follows the narrator while he takes a walk down the gloomy railway line and finds himself intrigued by a secluded signalman staring at the red light at the opening of the train tunnel. What compelled and inspired Charles Dickens to write this was his own experience of a train crash. This was known as "The Staple Hurst Rail Crash". In this real life situation, the signalman at the time did not wave his flag nor was in the correct position to be waving it. The train driver applied the breaks and consequently threw the train Charles Dickens was on off the bridge. Charles Dickens being one of the forty-nine people to survive was inspired to write a gothic tale about the "truth" of the railway and possibly establish people's views of this new method of transport. ...read more.

Moreover, Dickens has used dialogue to show that the signalman is mentally tortured by the responsibility of his job. "Why not tell me...why not tell me?" By using repetition in the signalman's speech, it proves the mental state that the signalman is in. This can create suspense for the reader as it creates anticipation and anxiety towards the forthcoming events. They do not know what will happen due to the state the signalman's head is in and cannot judge and expect anything and what will happen next. Dickens has also used emotive words like "tombs" which constantly reminds the reader of death, something that is most unexpected and can lead to uncertainty, which establishes suspense. Charles Dickens has used description and imagery of the surroundings and atmosphere to create suspense. "The signalman" is set along side a dark, gloomy railway and Dickens uses words to describe the atmosphere and surroundings in the short story. He describes the opening of the tunnel as having "a barbarous, depressing and forbidding air". In addition, he also describes the opening of the tunnel as having "a gloomy entrance to a black tunnel" This links to the eerie and peculiar atmosphere the description illustrates for us. The phrase "black tunnel" suggests a pitch-black passageway where nothing can be clarified or made clear and the describing words Dickens has used such as "depressing" and "gloomy" suggests somewhere where one would not choose to be. ...read more.

Charles Dickens has used a combination of techniques to create suspense in "The Signalman". I believe the most effective is the use of the supernatural and the unexplainable. This is because the supernatural is believed to be greater than the power of humans. Many people questioned the power and the science of the unexplainable and the queries gripped and disturbed people and made them believe there was something greater than them surrounding them daily. This connects to the Victorian fear of trains and how people assumed they were greater than the power of humans also. Due to this, I believe that the Victorian audience would be much more engrossed with suspense than the audience today. The Victorian audience could relate to the story as there were many queries circulating the trust and reliability of trains. It is known that Charles Dickens also had a fear of trains and many people believed it would cause miscarriages and disturbance of cows. The story was successful due to the era it was set in, the novelty of the train system and people's inevitable fear of it. However, the audience today would still feel it to be compelling as it's an interesting story and still has the potential and means to chill and scare people. The images placed in our heads and the thought of the dark, gloomy foreboding air that encircled the black tunnel of the railway can fright today's audience and still have an effective outcome left on the reader just like it did in 1866. ...read more.

A fair exploration of the language, setting and eponymous character used to create suspense. A personal response included and an awareness and understanding of social and historical context relating to contemporary reader response.
More work needed on expression and apt use of quotation to support points. The omission of repetition of the same point would also help improve the essay.