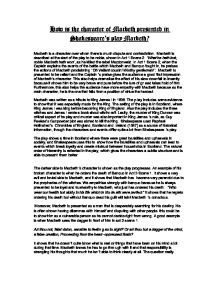 How is the character Macbeth presented in Shakespeares' play Macbeth

How is the character of Macbeth presented in Shakespeare's play Macbeth? Macbeth is a character over whom there is much dispute and contradiction. Macbeth is described at the start of the play to be noble, shown in Act 1 Scene 2 'What he hath lost, noble Macbeth hath won', as he killed the rebel Macdonwald. In Act 1 Scene 2, when the Captain explains the events of the battle which Macbeth and Banquo fought in, he praises the actions of Macbeth proclaiming 'Oh Valiant cousin! Worthy gentleman!'. Macbeth is presented to be valiant and the Captain's praise gives the audience a good first impression of Macbeth's character. This also helps dramatise the effect of his slow downfall to insanity because it shows him to be very brave and pure before the lure of greed takes hold of him. Furthermore, this also helps the audience have more empathy with Macbeth because as the main character, he is the one that falls from a position of virtue the hardest. Macbeth was written as a tribute to King James I in 1606. The play includes some evidence to show that it was especially made for the King. The setting of the play is in Scotland, where King James I was king before becoming King of England. Also the play includes the three witches and James I wrote a book about witchcraft. ...read more.

This is shown more to the end of the play as Macbeth and everyone else are redeemed by the death of Macbeth. It shows that Macbeth had fallen too much to pick himself up, as his actions and thoughts showed. Guilt as a theme plays a vital role in this play because Macbeth is guilty of murdering the king and his thoughts and feelings show that he can't forgive himself and that he tainted his hands more to try and make him forget his deed. All of these genres present Macbeth to be fatally flawed and broken and his downfall is a result of this. Because Macbeth feels guilty it can either deepen the resentment of the audience towards him or it could help cause the audience feel sympathetic towards him. This helps draw attention to the character as the audience need to pay close attention to him to find out whether their judgement was right. The characters in Macbeth are very important because they interact with Macbeth and they influence his decisions and his fate. Other characters are also important as they show us a comparison with the character of Macbeth, leading us to condemn or endorse his actions. The most influential character is his dominant wife, Lady Macbeth. She is presented as very persuasive and shown to have an overpowering presence on Macbeth. ...read more.

Also symbolism is used in act 2 scene 1 where Macbeth visualises the dagger with blood "is this a dagger which I see before me the handle toward my hand?" which symbolises his inward torment on the decision and also that he is almost blinded by his own driven greed for the throne. Moreover after the murder is done their guilt is symbolised by the blood that they (especially Lady Macbeth) see on their hands , "out damned spot", which gives the audience a better insight into their insanity. This is something used repeatedly which really emphasises the point. Overall, Shakespeare has presented Macbeth in an insightful and progressive way. The audience was able to emphasise with him and also build mistrust him just by the way the other characters interact with him and the language used to form his character. We were also shown what influence he had on other people which showed us a bit of how deceiving he is. Moreover, Macbeth's personality is presented to progressively become more negative and destructing as he becomes more wrapped up in self hatred and guilt because of his deeds. Lastly, I think Shakespeare used the character and slow self destruction of Macbeth to shape the story of the whole play, to make it draw the audience into the play an to make the play have it's own personality. ?? ?? ?? ?? ...read more.