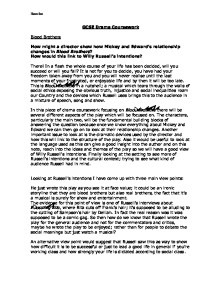 How might a director show how Mickey and Edward's relationship changes in Blood Brothers? How would this link to Willy Russell's intentions?

GCSE Drama Coursework Blood Brothers How might a director show how Mickey and Edward's relationship changes in Blood Brothers? How would this link to Willy Russell's intentions? There! In a flash the whole course of your life has been decided, will you succeed or will you fail? It is not for you to decide, you have had your freedom taken away from you and you will never realise until the last moments of your frustrated, or enjoyable life and by then it will be too late. This is Blood Brothers in a nutshell; a musical which tears through the walls of social ethics exposing the obvious truth, injustice and social inequalities roam our Country and the devices which Russell uses brings this to the audience in a mixture of speech, song and show. In this piece of drama coursework focusing on Blood Brothers there will be several different aspects of the play which will be focused on. The characters, particularly the main two, will be the fundamental building blocks of answering the question because once we know everything about Mickey and Edward we can then go on to look at their relationship changes. Another important issue to look at is the dramatic devices used by the director and how this will link to the structure of the play. Also it would be useful to look at the language used as this can give a good insight into the author and on this note, reach into the ideas and themes of the play so we will have a good view of Willy Russell's intentions. Finally looking at the setting to see more of Russell's intentions and the cultural context; trying to see what kind of audience Russell had in mind. Looking at Russell's intentions I have come up with three main view points: He just wrote this play as you see it at face value; it could be an ironic storyline that they are blood brothers but also real brothers, the fact that it's a musical is purely for show and entertainment. ...read more.

I think their mothers in this part telling them not to play with each other are supposed to symbolise their social classes telling them not to play with each other. The problem with all this symbolism is that it's difficult for a director to show a symbol if the audience isn't thinking like that, you can emphasise the symbol but only up to a certain point before it gets out of hand. When Edward moves away they don't see each other for about six years and not much has happened in that six years. Russell must have put this unnatural time jump in the play for a reason. The reason I think that he put this unnatural time jump in was to show how the characters and have grown up as they have spent more time away from each other they have drifted further apart; this could be shown with music, perhaps a song that seems to last too long. As far as I can see the main reason for having a song is just to show the gap because a play couldn't have five minutes of nothing happening so Russell put a song there unless of course he liked musicals. But a song can still carry the same message as an actor just talking to the audience for ten minutes which would get tedious after a while. Apart from those few reasons I can't really come up with a main reason for Blood Brothers being a musical perhaps it's just because they're more entertaining than ordinary plays. So when the boys meet again Mickey still has his cocky attitude and he has a lot of pride, when he's with Linda aged fourteen (just before Edward comes in) he's very careful not to look like a fool but he's too overcautious. When Linda is messing around with Mickey telling him to be gentle whilst pulling her free, he responds almost angrily saying "Will you stop taking the piss out of me!" ...read more.

"And do we blame superstition for what came to pass? Or could it be what we, the English have to come to know as class?" I think that Russell is saying it isn't superstition, it isn't a radio show you can turn off or on, it isn't an old film with Marilyn Monroe, this is real life. The only reason for the events in Blood Brothers is because of class and we know it, don't try and pretend it's something else. In my opinion I would say that the whole relationship progression between Mickey and Edward is meant to symbolise Willy Russell's frustration at the huge class divide which still exists today. The 'we' in that quote suggests that it's our problem; it makes it more personal and brings the whole theme of social injustices home to the audience. The 'we' also appears in the second sentence of that quote, it occurs just before a comma it makes you take a breath and you realise it is us. Then there are the words ", the English have come to know as class" I think that is saying that all these discriminations and injustices that happen as a result of what we call class, is just what we call it and other countries have different names for it, such as the cast system in India. To conclude: Willy Russell's musical Blood Brothers has a very well thought out plot and seems to reach deep into the ethics of social life exposing them for what they really are. I hope any director would pick up on this and make it very clear to the audience; otherwise the entire point of the story is lost. At the start I didn't think that this was a very good play but the more I read into the story line the better it became and a lot of Willy Russell's frustrations about social divide came off in my own feelings about the characters and their lives. ?? ?? ?? ?? Have fun ...read more.