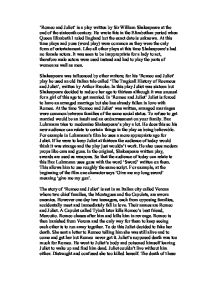 'Romeo and Juliet' is a play written by Sir William Shakespeare at the end of the sixteenth century. He wrote this in the Elizabethan period when Queen Elizabeth I ruled England but the exact date is unknown. At this time plays and puns (word play) were common as they were the only form of entertainment. Like all other plays at this time Shakespeare's had no female actors. It was seen to be inappropriate for a lady to act, therefore male actors were used instead and had to play the parts of women as well as men. Shakespeare was influenced by other writers; for his 'Romeo and Juliet' play he used an old Italian tale called 'The Tragicall History of Roemeus and Juliet', written by Arthur Brooke. In this play Juliet was sixteen but Shakespeare decided to reduce her age to thirteen although it was unusual for a girl of this age to get married. In 'Romeo and Juliet' Juliet is forced to have an arranged marriage but she has already fallen in love with Romeo. At the time 'Romeo and Juliet' was written, arranged marriages were common between families of the same social status. To refuse to get married would be an insult and an embarrassment on your family. Baz Luhrmann tries to modernise Shakespeare's play a lot. He does this so his new audience can relate to certain things in the play as being believable. ...read more.

- If he be married, My grave is like to be my wedding bed' She is referring to death being her groom. This is another moment in which Romeo and Juliet talk of death. The nurse then replies, 'His name is Romeo, and a Montague, The only son of your great enemy.' This is when Juliet finds out that Romeo is her most sworn enemy's (the head of the Montague family's) son. As well as the dialogue, Baz Luhrmann uses courtly love and other techniques through his choices of colours, props and music. In his film version of 'Romeo and Juliet' Baz Luhrmann expresses courtly love through the costumes that Romeo and Juliet wear during the party scene. Romeo is wearing a knight's armour and Juliet wears an angel costume. Courtly love is shown because Romeo is dressed as a knight just like in the story of courtly love. It is also shown through Juliet's costume, this is because as an angel she is then seen to be higher up and more powerful. In courtly love she would be like the lord's wife who is more important than the night that serves and loves her. Juliet's angel costume also brings back the religious theme that Shakespeare uses throughout the play. Props and colours play a big part in the way a movie makes the audience feel. Romeo and Juliet see each other for the first time through a fish tank. ...read more.

He conducts a long speech in which he speaks his final words. Before drinking down the poison he say ' Here's to my love!' which means he is doing this for her. Juliet then wakes to find Romeo's body. Devastated she says a small speech in which she says 'Haply some poison yet doth hang on, to make me die with a restorative. Thy lips are warm'. She is saying that maybe they have been poisoned. By saying that she will die in restorative she is saying that her kiss will cure her life and restore her to Romeo. Romeo's speech is much longer than Juliet's because he has had more time to grieve and has planned his death whereas Juliet killed herself in panic without thinking before she did so. At the beginning of this scene Romeo kills Paris. This is cut out from Baz Luhrmann's film so the storyline, of how Romeo and Juliet killed themselves, can be concentrated on. Luhrmann also uses props like candles and a giant church hall. This could not have been done in Shakespeare's time. Shakespeare uses a wide range of techniques to convey the relationship between Romeo and Juliet. Metaphors, similes and personifications are all used to show a particular emotion or feeling. Courtly love and religious phrases are also used to express the relationship between Romeo and Juliet. Shakespeare used these techniques to their full potential. Baz Luhrmann also used his own techniques that worked well to produce a wider range of emotions through choices of props and colour. ...read more.