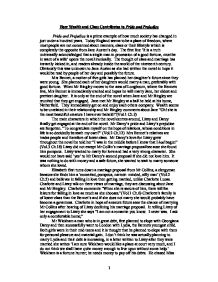 How Wealth and Class Contributes to Pride and Prejudice.

How Wealth and Class Contributes to Pride and Prejudice Pride and Prejudice is a prime example of how much society has changed in just under a hundred years. Today England seems to be a place of freedom, where most people are not concerned about manners, class or their lifestyle which is completely the opposite from Jane Austen's day. The first line 'It is a truth universally acknowledged that a single man in procession of a good fortune, must be in want of a wife' opens the novel ironically. The thought of class and marriage has instantly kicked in, and readers already inside the world of the nineteenth century. Obviously this was unknown to Jane Austen as she had written the novel in hope it would be read by people of her day and possibly the future. Mrs Bennet, a mother of five girls has planned her daughter's future since they were young. She planned each of her daughters would marry a man, preferably with good fortune. When Mr Bingley moves to the area of Longbourn, where the Bennets live, Mrs Bennet is immediately excited and hopes he will marry Jane, her eldest and prettiest daughter. ...read more.

In telling Lizzy of her engagement to Lizzy she says "I am not a romantic you know. I never was. I ask only a comfortable home;" Mr Wickham a man who is in great debt, first planned to elope with Georgiana Darcy and then successfully went to London with Lydia, the Bennets youngest child. Both girls were in their mid-teens and it is thought that he planned to elope with them for personal pleasure and material gain. I don't think he was actually planning to marry Lydia and their debt is increasing, in a letter written to Lizzy after they were married she writes 'I am sure Wickham would like a place at court very much, and I do not think we shall have quite money enough to live upon without some help.' Wickham is a fortune hunter; he needs money to pay off his debts. He chased Miss King because she was a woman of great fortune, in Mr Darcy's letter to Elizabeth he writes his "chief object was unquestionably my sister's fortune"(Vol.2 Chap.12) Each married couple moved away from the area of Longbourn, Lydia and Wickham were the only couple that were unstable financially. ...read more.

Lady Catherine is surprised when Lizzy is confident and forward in conversations, unlike Mr Collins who does everything he can to please her. Lady Catherine cares a lot about class and when she hears that Lizzy and Mr Darcy might get married she travels to Longbourne to speak to Lizzy asking if it is true. She does not want Lizzy to marry Darcy because she is of lower class and Lady Catherine has planned him to marry her daughter. Darcy at the beginning of the novel is ignorant, he comments that Lizzy is 'tolerable'(Vol.1 Ch.3) and says that Jane is the only person who would be good enough for him, out of everyone at the Netherfield ball. Mr Collins a man, who is in the middle class, wants to have a wife and his changing decision quickly 'The strangeness of Mr Collin's making two offers of marriage within three days, was nothing in comparison with his now being accepted.'(Vol.1 Ch.22) Mr Wickham at the beginning of the novel is unknown by the reader to be in debt. As he is in a regiment it is assumed that he is stable financially. The Bennets are in the middle class they are not as poor as the Lucas' but not as well off as Mr Bingley. They have a stable amount of money to keep four girls. 1 ...read more.