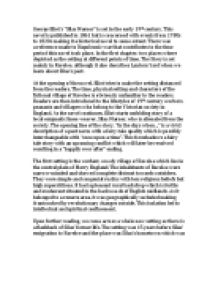 How well does George Eliot establish the setting in the first chapter? (Silas Marner)

﻿George Eliot?s ?Silas Marner? is set in the early 19th century. This novel is published in 1861 but is concerned with events from 1780s to 1820s making it a historical novel to some extent. There was a reference made to Napoleonic war that contributes to the time period this novel took place. In the first chapter, two places where depicted as the setting at different points of time. The Story is set mainly in Raveloe, although it also describes Lantern Yard when we learn about Silas's past. At the opening of the novel, Eliot tries to make the setting distanced from the readers. ...read more.

This foreshadows a fairy tale story with an upcoming conflict which will later be resolved resulting in a ?happily ever after? ending. The first setting is the verdant, woody village of Raveloe which lies in the central plain of Merry England. The inhabitants of Raveloe were narrow-minded and showed complete distrust towards outsiders. They were simple and congenial rustics with less religious beliefs but high superstitions. It had a pleasant rural backdrop which is fertile and exuberant situated in the backwoods of English midlands. As it belonged to a remote area, it was geographically secluded making it untouched by revolutionary changes outside. ...read more.

This place was a complete religious cult-like sect on the contrary to Raveloe. Here, Silas lived as a young man with “exemplary life and ardent faith”. In addition, his catalepsy fit was known by all but was seen positively. The tragedy struck when Silas was accused of theft committed by his best friend William Dane who marries Silas’s ex-fiancée and does a complete betrayal towards Silas. That caused Silas to leave town and emigrate to Raveloe working as a weaver with enclosed, mysterious life. George Eliot uses various descriptive phrases which was helpful in effective visualization to allow readers to be able to understand the setting and get the complete idea. Not being in a chronological order, it constantly ignites our curiosity of wanting to know more about what environment Silas Manor has been through. ...read more.