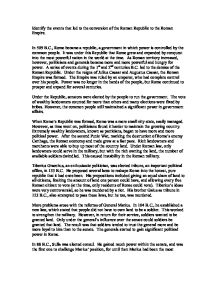 Identify the events that led to the conversion of the Roman Republic to the Roman Empire.

Identify the events that led to the conversion of the Roman Republic to the Roman Empire. In 509 B.C., Rome became a republic, a government in which power is controlled by the common people. It was under this Republic that Rome grew and expanded by conquest into the most powerful nation in the world at the time. As Roman territory increased, however, politicians and generals became more and more powerful and hungry for power. A series of events during the 1st and 2nd centuries B.C. led to the demise of the Roman Republic. Under the reigns of Julius Caesar and Augustus Caesar, the Roman Empire was formed. The Empire was ruled by an emperor, who had complete control over his people. Power was no longer in the hands of the people, but Rome continued to prosper and expand for several centuries. Under the Republic, senators were elected by the people to run the government. The vote of wealthy landowners counted for more than others and many elections were fixed by bribes. However, the common people still maintained a significant power in government affairs. When Rome's Republic was formed, Rome was a mere small city-state, easily managed. ...read more.

A civil war erupted. Marius marched his army on Rome forcing Sulla to flee. Marius soon died, but his supporters continued the fight. Sulla came back with an army of his own and marched on Rome, declaring himself dictator in 82 B.C. He died in 78 B.C, but his reign encouraged others to grab absolute power over Rome. After Sulla's dictatorship was over, Rome temporarily went back to being controlled by the senate. Meanwhile, Pompey, the most distinguished general of the time, was gaining public favor from his many military victories. At the same time, Crassus, the wealthiest man in Rome, also gained much popularity from the common people, for defeating a large slave uprising. Each held the ambition of someday ruling Rome. Another prominent general who was gaining popularity was Julius Caesar. Pompey, Crassus, and Caesar made a secret alliance to work together to gain control over the senate. This alliance became known as the First Triumvirate. Caesar was elected consul in 60 B.C. He proposed laws that would gain the triumvirate even more power. When these laws were opposed, Crassus and Caesar resorted to violence and intimidation in order to get them passed. ...read more.

Octavian attacked Eastern Rome and defeated Antony. Octavian, who had changed his name to Augustus, was finally supreme ruler over Rome. The republic had died. While the senate still existed, it had little say in government matters and could certainly not challenge the word of the emperor. Ten Caesars came after Augustus to rule over Rome. Despite the crippling of the Republic, Rome continued to prosper and expand for several centuries until its eventual decline. Questions 1. The First Triumvirate consisted of which of the following a. Julius Caesar, Mark Antony, Sulla b. Pompey, Crassus, Cleopatra c. Pompey, Crassus, Julius Caesar d. Octavian, Brutus, Marius 2. The Second Triumvirate consisted of which of the following a. Octavian, Mark Antony, Lepidus b. Octavian, Julius Caesar, Tiberius Gracchus c. Sulla, Crassus, Pompey d. Gaius, Cicero, Bill Clinton 3. Octavian accused Mark Antony of being disloyal to Rome by: a. murdering Julius Caesar b. leading an army into Rome c. getting involved with Cleopatra d. falling off his horse too many times 4. Tiberius Gracchus's proposals included all except: a. giving an equal share of land to all citizens b. limiting the amount of land one person could have c. allowing every free citizen to vote d. granting absolute power to a dictator Answers: 1c, 2a, 3c, 4d ...read more.