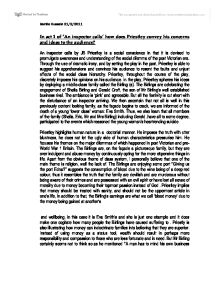 In act 1 of An inspector calls how does Priestley convey his concerns and ideas to the audience?

In act 1 of 'An inspector calls' how does Priestley convey his concerns and ideas to the audience? An inspector calls by JB Priestley is a social conscience in that it is devised to promulgate awareness and understanding of the social dilemma of the post Victorian era. Through the use of dramatic irony, and by setting the play in the past, Priestley is able to suggest his apprehensions and convince his audience to resent the faults and unjust effects of the social class hierarchy. Priestley, throughout the course of the play, discretely imposes his opinions on his audience. In the play, Priestley spheres his ideas by deploying a middle-class family called the Birling (s). The Birlings are celebrating the engagement of Sheila Birling and Gerald Croft, the son of Mr Birling's well established business rival. The ambiance is 'pink' and agreeable. But all the festivity is cut short with the disturbance of an inspector arriving. We then ascertain that not all is well in this previously content looking family, as the fa�ade begins to crack, we are informed of the death of a young 'lower class' woman: Eva Smith. Thus, we also learn that all members of the family (Sheila, Eric, Mr and Mrs Birling) including Gerald ,have all to some degree, participated to the events which reasoned the young woman's heartrending suicide. Priestley highlights human nature in a doctorial manner. He imposes the truth with utter bluntness, he does not let the ugly side of human characteristics pressurise him. He focuses his themes on the major dilemmas of which happened in post Victorian and pre-World War 1 Britain. ...read more.

However, with the arrival of the inspector, a bright white light is produced implying a ghostly and religious individual set out to unmask the family's deep and bad deeds which they have been trying to secrete. Essentially it is like day of judgement for them, their evils have caught up with them and it is impossible to gainsay their actions which have led to Eva Smith's fundamental death. The white light correspondingly insinuates inspector Goole's witty and subtle debriefing. The play has a variety of mystifying genres such as mystery, 'whodunit' and eventually a gothic horror. The play also features a sense of a fable as it teaches a lesson (though animals are not used). The audience are engaged in the play because they are given different accounts of how Eva Smith was mistreated and the possible reason(s) which may have resulted in her suicide. Priestley probably used a wide range of genres to create tension and suspense. The audience are aware of what is happening but are kept hooked and unsure whether their calculations are correct. The aftermath that has been initiated by the variety of genres has a big impact as it sets the audience's paces racing, and it is likely that this will establish some form of a revolution against issues such as capitalism and hopefully it would result into some sort of a prohibition of the social hierarchy. Mr Birling is a noteworthy character, yet he is awfully transparent. The fact that he has no sense of his immoderate behaviour is appalling, in spite of that, he seems to believe that his behaviour to be of ...read more.

His socialism was based on sympathy and concern for others. He, himself came from a working class background, so he could obviously feel sympathy for factory workers abused by industrialists like Arthur Birling. The end of WWII symbolised a fresh start. Young people were expected to learn from the mistakes which were created by the previous generation. With mistakes learnt, the 'new' generation should avoid being shallow and start showing each other more consideration and respect, life is trial and error, alternatives of the social hierarchy should be cogitated. I also believe that Priestley was encouraging people to be in touch with their spirituality again, for example a Christian should avoid committing a deadly sin, if they do, they will have to pay the consequences of their actions. Eva Smith essentially represented poor people. She found it hard to keep a job because of a selfish boss( Mr Birling), she then lost another job for a trivial reason imposed by Sheila Birling. She was in an unjust brief relationship with Gerald Croft who used her and abused her emotions. Later on, her and Eric Birling were involved in an 'affaire de coeur' in which she got impregnated without marriage encompassed (this would count as l**t, which is one of the deadly sin). Priestley has been able to convey his concerns and ideas objectively, he is one persona to admire, he's somebody that we can all learn something from. His play 'An inspector calls' is a British treasure, it deals with great philosophies which we can all learn values of life to. People will hopefully, in the future continue to look back in order to move forward. ?? ?? ?? ?? Jamila Hussein 21/2/2011 ...read more.