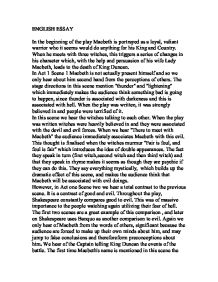 In the beginning of the play Macbeth is portrayed as a loyal, valiant warrior who it seems would do anything for his King and Country.

ENGLISH ESSAY In the beginning of the play Macbeth is portrayed as a loyal, valiant warrior who it seems would do anything for his King and Country. When he meets with three witches, this triggers a series of changes in his character which, with the help and persuasion of his wife Lady Macbeth, leads to the death of King Duncan. In Act 1 Scene 1 Macbeth is not actually present himself and so we only hear about him second hand from the perceptions of others. The stage directions in this scene mention "thunder" and "lightening" which immediately makes the audience think something bad is going to happen, since thunder is associated with darkeness and this is associated with h**l. When the play was written, it was strongly believed in and people were terrified of it. In this scene we hear the witches talking to each other. When the play was written witches were heavily believed in and they were associated with the devil and evil forces. When we hear "There to meet with Macbeth" the audience immediately associates Macbeth with this evil. This thought is finalised when the witches murmur "Fair is foul, and foul is fair" which introduces the idea of double appearances. The fact they speak in turn (first witch,second witch and then third witch) and that they speak in rhyme makes it seems as though they are psychic if they can do this. They say everything mystically, which builds up the dramatic effect of this scene, and makes the audience think that Macbeth will be associated with evil doings. However, in Act one Scene two we hear a total contrast to the previous scene. It is a contrast of good and evil. Throughout the play, Shakespeare constantly compares good to evil. This was of massive importance to the people watching again utilizing their fear of h**l. The first two scenes are a great example of this comparison , and later on Shakespeare uses Banquo as another comparison to evil. ...read more.

He was a gentleman on whom I built an absolute trust." This is dramatic timing. The fact that Macbeth enters just after this makes the audience think that maybe we shouldn't judge Macbeth either. Shakespeares use of dramatic irony links Macbeth directly to Duncan's comments. Macbeth learns that "Malcolm" will "establish upon our estate" (is next in line for the throne.) Macbeth reacts to this by thinking "it is a step to which I must fall down or o'erleap, for in my way it lies." It appears that he has come to terms with the fact that he will now become king, but this news suggests that he cannot become it. Macbeth knows his thoughts are wrong because he doesn't want "light to see my black and deep desires." He doesn't want people to tell from his expression what dark and devious thouhts he is concucting. In Act 1 scene 5 we get an insight into the relationship between Lady Macbeth and Macbeth. The stage direction of "reading a letter" shows us they are very intimate and they share everything. It is a very valuable relationship and it is needed by both of them to survive. Lady Macbeth obviously know her husband very well as she he remarks he's "too full o' th' milk of human kindness". She sees him as having ambition without wickedness in order to get what they both desire. She knows he will need persuading and plans to use strong words that she knows will have an effect on her husband. She tells him to "look like th' innocent flower, but be the serpent under't'." This is also a biblical metaphor going back to the time of Adam and Eve and the serpent who tricked Adam into eating the forbidden fruit, casting wickedness into a previously perfect existance. The serpent is therefore associated with evil and wickedness. Shakespeare includes references to this is many plays, again using the importance of religion, because everyone understood and could relate to it. ...read more.

Macbeth is upset because he couldn't say "amen" to the guards' prayers to try and ammend what he was doing to God showing he knows he has done wrong. Lady Macbeth is more calm and just replies "consider it not so deeply." She is taking charge of the situation. She gives orders to Macbeth and demands of him to "go carry them" and "wash this filthy witness from your hand." He cannot cope with it himself. He says "Macbeth will sleep no more." His hands are tainted with blood and everything he now touches he will now be covered in blood; a disturbing metophoric sight fot the audience. Lady Macbeth says "be not lost so poorly in your thoughts" to which he replies "To know my deed, 'twere best not know my self" which tells us he doesn't want to face the reality of his crime. The last thing he says in this scene is "Wake Duncan with thy knocking. I would thou couldst". He wishes he could wake Duncan, revealing he deeply regrets what he has done. Despite this, Macbeth is now a traitor himself. He is not at ease with himself or his relationship with Lady Macbeth. He seems untrustworthy and not the strong independent warrior he once was. In act 1 scene 2 when we heard about him, he was portrayed as loyal. The thought of killing the King for his own sake was out of the question to Macbeth. There is a big difference between fighting for the country and killing the King, but with the influence of the witches, ambitions of Lady Macbeth and his own desires he overcame this to become this selfish person who he now is. Even if he does become king, his relationship with Lady Macbeth is in jeopardy, he has lied to his trusted friend Banquo, and he cannot cope with the guilt. Was becoming king more important to him than that? ...read more.