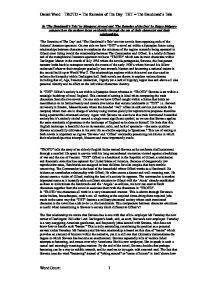 In 'The Handmaid's Tale' by Margaret Atwood and 'The Remains of the Day' by Kazuo Ishiguro compare how the authors focus on identity through the use of their characters and their relationships.

In 'The Handmaid's Tale' by Margaret Atwood and 'The Remains of the Day' by Kazuo Ishiguro compare how the authors focus on identity through the use of their characters and their relationships. 'The Remains of The Day' and 'The Handmaid's Tale' are two novels from opposing ends of the fictional literature spectrum. On one side we have "THT" a novel set within a dystopian future using relationships between characters to emphasise the strictness of the regime currently being operated in Gilead most fitting would the relationship between The Commander and Offred. In a totally different end of the metaphorical literature spectrum we have "TROTD" which sets its main characters within Darlington Manor in the month of July 1956 where the novels protagonist, Stevens, the first person narrator looks back in retrospect towards the events of the early 1920's where him and his fellow under-staff observe their employer gradually lean towards Nazism and becoming a national traitor in the crucial build up to World War II. The relationships explore within this novel are also used to enforce the hierarchy within Darlington hall. ...read more.

Because of dangerously low reproduction rates, Handmaids are assigned to bear children for elite couples that have trouble conceiving. The Commander is the head of the household where Offred works as a Handmaid. He initiates an unorthodox relationship with Offred; He often seems a decent and well-meaning man. He almost seems a victim of Gilead, making the best of a society he opposes. The commander is another important name as it instantly adds a military structure to Gilead with the 'Aunts' already established as there to indoctrinate the handmaids and the 'Angels' as soldiers, we now can start to block characters together from the novel to associate them with the characters in "TROTD". In 'TROTD' the characters all work in a very constructed manner. This is shown through Stevens's under butlers, housekeepers, cook's etc. all working at the required times doing there required jobs much to the same way that "THT" features a military structured society where each mentioned character in the novel has a job to do i.e. the handmaids. This comparison between character structures is useful when determining is Stevens's society much different to Offred's? ...read more.

Gilead seems to promote solidarity between women, but in fact it only produces more suspicion, hostility, and petty tyranny than it can internally cope with. The kind of relationship that Moira and Offred maintain from college onward does not exist in Gilead as it is not accepted by the regime. In "TROTD" we instantly notice the formality in which the first person narrator Stevens speaks. This is quite clearly Ishiguro's intention as it features predominantly throughout the novel. Usually Ishiguro writes post-colonial novels but "TROTD" is commonly branded a post-imperialist piece of literature. Ishiguro however seems to have changed his style completely as his Japanese heritage is non present within neither the plot nor the narrative of Stevens. In "THT" Atwood explores a basic "return to traditional values" society that basically highlights the nineteen eighties fears about declining birth-rates, the dangers of nuclear power, and environmental degradation. Much like "TROTD" Atwood tackles the intersection of politics - as well as sexuality -. Atwood's novel is one of the only recent hard hitting portrayals of a totalitarian society. Points discussed: 1) Society's effect on different relationships 2) First defining relationships 3) Info structure of characters in novels 4) Main characters personal traits and faults 5) Setting in novels and its effect on characters relationships 6) Writers intentions and style/language etc. ...read more.