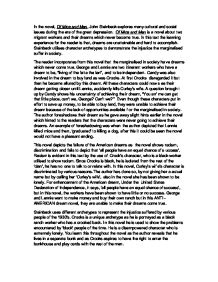 In the novel, Of Mice and Men, John Steinbeck explores many cultural and social issues during the era of the great depression.

In the novel, Of Mice and Men, John Steinbeck explores many cultural and social issues during the era of the great depression. Of Mice and Men is a novel about two migrant workers and their dreams which never become true. In this text the learning experience for the reader is that, dreams are unattainable and hard to accomplish. Steinbeck utilises character archetypes to demonstrate the injustice the marginalised suffer in society. The reader incorporates from this novel that the marginalised in society have dreams which never come true. George and Lennie are two itinerant workers who have a dream to be, "living of the fatta the lan", and to be independent. ...read more.

The author foreshadows their dream as he gave away slight hints earlier in the novel which hinted to the readers that the characters were never going to achieve their dreams. An example of foreshadowing was when the author depicted that Lennie killed mice and then, 'graduated' to killing a dog, after this it could be seen the novel would not have a pleasant ending. This novel depicts the failure of the American dreams as the novel shows r****m, discrimination and fails to depict that 'all people have an equal chance of success'. r****m is evident in this text by the use of Crook's character, who is a black worker utilised to show r****m. ...read more.

George and Lennie want to make money and buy their own ranch but in this ANTI-AMERICAN dream novel, they are unable to make their dreams come true. Steinbeck uses different archetypes to represent the injustice suffered by various people of the 1930's. Crooks is a unique archetype as he is portrayed as a black ranch worker who has a crooked back. In this novel he is used to show the problems encountered by 'black' people of the time. He is a disempowered character who is extremely lonely. You learn this throughout the novel as the author reveals that he lives in a separate bunk and as Crooks aspires to have the right to enter the bunkhouse and play cards with the rest of the men. ...read more.

The basic ideas about the social and historical factors that influenced this text are addressed in this essay but they are not as developed as they could be. Consider links between characters and events and how Steinbeck uses them to present his themes.