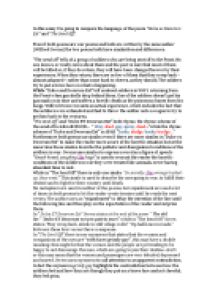 In this essay Im going to compare the language, of the poems Dulce es Decorum Est and The Send Off

﻿In this essay I?m going to compare the language, of the poem ?Dulce es Decorum Est? and ?The Send Off?. Even if both poems are war poems and both are written by the same author (Wilfred Owens) the two poems both have similarities and differences. ?The send off? tells of a group of soldiers who are being sent off to the Front. No one knows, or really cares about them and the poet is sure that most of them will be killed or, if they do return, they will have been changed forever by their experiences. When they return, there are so few of them that they creep back ? almost ashamed ? rather than come back to cheers, as they should. The soldiers try to put a brave face on what is happening. While ?Dulce and Decorum Est? tell us about soldiers in WW1 returning from the Front when gas shells drop behind them. One of the soldiers doesn?t get his gas mask on in time and suffers a horrific death as the poisonous fumes burn his lungs. Wilfred Owen recounts an actual experience, which includes the fact that the soldiers were exhausted and had to throw the soldier onto a wagon to try to get him back to the rest area. ?The send off? and ?Dulce ET Decorum Est? both rhyme, the rhyme scheme of the send off is ABAABCDCCB? ? Way, shed, gay, spray, dead??while ...read more.

?He plunges at me guttering, choking, drowning? Even pictures of death are also painted in the poem ?The send-off? ?A few, a few too few for drums and yells, may creep back silent to village wells? ?A few, a few too few for drums and yells? implements that too few men have returned, this means that lots of soldiers have been killed in the war, to the contrary of the description of the death of Owens? companion in ?Dulce and Decorum Est ? (he plunges at me guttering?) this description of death is much less direct, in fact there is no direct description of the men?s death in war, to the contrary of ?Dulce and Decorum Est?. ENDING- MESSAGE- title The ending of ?Dulce et Decorum Est? is sad but contains a warning, to all the people: it states that to die for your country is nothing glorious, it is preposterous, there is nothing glorious and victorious to die for your country. Death is neither sweet nor right; there is no honor to die for your country without a reason. However this message is repeated in several occasions in the poesy, even at the beginning, in fact the title of the poem is ?DULCE ET DECORUM EST?. Owens lets this poem finish with a message so he?s sure that people understand that ?pro patria mori? (to die for their country) ...read more.

In Dulce and Decorum EST Owen tells the story in the first half of the poem, then gives his own reaction. In the 3rd verse he talks directly to the reader and to the people who have sent the soldier to this horrific death ?You/ my friend? Furthermore Owen regards the soldiers as victims, calls them ?children? and ?innocent? because they have been taken in by lies. This makes the poem more effective and more specific. The readers know that Owen is addressing to them. While from the start of ?The Send Off? a feeling that something is being hidden ?darkening? The vocabulary Owen gives a feeling of secrecy, e.g., ?siding/ hushed up/ nodded/ winked/ secrecy? as if society has a conspiracy to send the soldiers to do their work for them and the fact that no one cares is shown by words like ?casual? and ?dull? Tension builds to the last strophe when the men either do not return or are completely changed by their experiences There are vivid images of flowers to send them on their way, remind us of funeral wreaths and Owen uses personification: the lamps and signals seem to be in on the conspiracy to allow the soldiers to go to their deaths. (?And a lamp Winked to the guard.?) Owen uses personification raise the curiosity of the reader so he finishes the poem, fully understanding the situation around him/her. I conclude that both poems of Wilfred Owen have similarities and differences. ...read more.