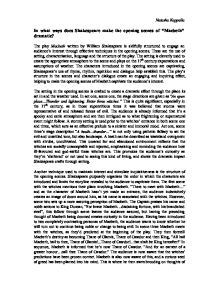 In what ways does Shakespeare make the opening scenes of Macbeth dramatic?

Natasha Kappella In what ways does Shakespeare make the opening scenes of "Macbeth" dramatic? The play Macbeth written by William Shakespeare is skilfully structured to engage an audience's interest through effective techniques in the opening scenes. These are the use of setting, characterisation, language and the structure of the play. The setting is cleverly used to create the appropriate atmosphere to the scene and plays on the 17th century expectations and assumptions of weather. The characters introduced in the opening scenes are captivating, Shakespeare's use of rhyme, rhythm, repetition and dialogue help establish this. The play's structure in the scenes and character's dialogue create an engaging and inquiring effect, helping to make the opening scenes of Macbeth captivate the audience's interest. The setting in the opening scenes is crafted to create a dramatic effect through the place its set in and the weather used. In act one, scene one, the stage directions are given as "An open place...Thunder and lightening. Enter three witches." This is quite significant, especially in the 17th century, as in those superstitious times it was believed that storms were representative of and released forces of evil. The audience is already informed that it's a spooky and eerie atmosphere and are then intrigued as to what frightening or supernatural event might follow. A stormy setting is used prior to the witches' entrance in both scene one and three, which acts as an effective prelude to a sinister and immoral mood. ...read more.

In scene three witch 1 is discussing taking revenge on a woman's husband, as she'd not given her chestnuts, "...and munched, and munched, and munched...'Aroint thee witch,'...I'll do, I'll do, and I'll do." The woman tells the witch to get lost, 'aroint', and this angers the witch to take revenge, 'I'll do'. To speak words or phrases in triplets really states how powerful or magical they are as in Shakespeare's time the number 3, and multiples of 3, were regarded as magic numbers. The witches cite triplets and magic numbers a number of times in the opening scenes, "...nine times nine...thrice to thine, and thrice to mine, and thrice again, to make up nine." So in addition to speaking in rhyming couplets and rhythm, Shakespeare uses society's superstition to enhance the witches' dark and forbidden characterisation. In addition to these unusual ways of speaking, the witches are portrayed to be physically unappealing. Banquo's first impression was dismayed and confused, "What are these, so withered, and so wild in their attire..." He describes how unattractive and degraded they appear, "...look not like th' inhabitants o' th' earth...Live you, or are you aught that man may question?" Banquo is suggesting that they look nothing like humans, and is hesitant to ask if they are as he fears they're evil spirits. This really exemplifies the witches' characteristics to be spooky, eerie and devious. This would be more so appealing to an Elizabethan audience as they'd been sheltered and kept away from anything dark and sinful. ...read more.

He continues his obsession, describing how awful his thoughts are. "The eye wink at the hand; yet let that be, Which the eye fears when it is done to see." Macbeth's saying 'the eye', any witnesses, should be blind to what he's about to do (in thought) as, if anyone's exposed to what he's done they'll be in fear. Alternatively, Macbeth could be suggesting that his eyes should be blind to what his hands are doing (his actions) as if he let's both his personas clash (his noble side and evil side), he'll regret what he's done. Macbeth's character is so episodic, changing his beliefs and qualities from scene to scene. The language in the dialogue is so varied and interesting through assonance, irony, similes and metaphors, that the audience are immediately absorbed and inquiring. The opening scenes of Macbeth are made dramatic through a series of techniques including setting, structure, characters and language. Shakespeare effectively uses weather and landscape to create and enhance an eerie and immoral mood, mostly prior to the witches' entrance. Intrigue is also stimulated through the play's structure, in both Shakespeare's order of scenes and use of dialogue. Limiting the storyline revealed and purposely organising the order in which characters are introduced develop anticipation and inquisitiveness amongst the audience. Overall the characters and language introduced in the opening scenes are the utmost captivating. Their characterisations are constructed through language compiling of techniques such as similes, assonance, metaphors, rhythm, rhyme and irony. All of these effectively help to make the opening scenes of Macbeth extremely enthralling, interesting and dramatic. ...read more.