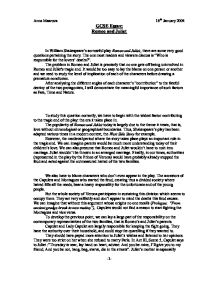 In William Shakespeare's sorrowful play Romeo and Juliet, there are some very good questions pertaining the story. The one most readers and viewers discuss is

Anna Maarova 18th January 2004 GCSE Essay; Romeo and Juliet In William Shakespeare's sorrowful play Romeo and Juliet, there are some very good questions pertaining the story. The one most readers and viewers discuss is "Who is responsible for the lovers' deaths?". The problem in Romeo and Juliet is precisely that no one gets off being uninvolved in Romeo and Juliet's tragic end. It would be too easy to lay the blame on one person or another and we need to study the level of implication of each of the characters before drawing a premature conclusion. After analysing the different angles of each character's "contribution" to the fateful destiny of the two protagonists, I will demonstrate the meaningful importance of such factors as Fate, Time and Nature. To study this question correctly, we have to begin with the widest factor contributing to the tragic end of the play: the era it takes place in. The popularity of Romeo and Juliet today is largely due to the theme it treats, that is, love without chronological or geographical boundaries. Thus, Shakespeare's play has been adapted various times in a modern context, the West Side Story for example. However, the medieval period where the story takes place plays an important role in the tragic end. We can imagine parents would be much more understanding today of their children's love. We can also presume that Romeo and Juliet wouldn't have to rush into marriage. Juliet wouldn't be thrown in an arranged marriage. ...read more.

On the other hand, it would be a hard man indeed who laid all the blame for this tragedy at the cell door of Friar Lawrence. His potion actually worked as it was intended, and he only suggests it as a desperate, but possible way out of an impossible situation. In fact, we have to remember he is a man of the Church, and suicide was considered a mortal sin. Romeo, in Act III, scene 3, when he learns of his banishment and the Nurse then tells him of Juliet's grief, threatens to kill himself. And in Act IV, scene 1, after Juliet has met Paris at the Friar's cell, she too becomes suicidal. Juliet has an almost non-existent relationship with Capulet. Friar Lawrence fills this void by portraying a father figure in Juliet's life. She trusts him and confides in him regularly. ("Hold daughter. I do spy a kind of hope"). In addition the Friar is also Romeo's confident and tries to find solutions to their overwhelming problems. He also breaks the terrible news to Romeo about his banishment, and he tries to do so in a human way. He comforts the distraught Romeo and offers him all his help. The friar doesn't expect disaster when he marries the two. In fact, he does so hoping the union will bring together the feuding families. Friar Lawrence largely contributed to the deaths of Romeo and Juliet by marrying them despite their ages, giving Juliet the poison and by not thinking things through clearly. Instead he always tried to find a quick solution. ...read more.

Older people might be inclined to blame the young lovers for their rashness and younger people might want to blame father Capulet for wanting to control Juliet and being to strict on her. This question does not have a single right answer, because it is impossible to "measure" responsibility in such a way that you can lay most blame on one person - it's more appropriate to think about how each contributes to the tragedy. The responsibility for the deaths of the young people lies firmly at the door of the so-called responsible adults who created and sustain a divided society. The feud between the Capulets and Montagues is a cancer in the society of Verona, everyone is affected by it. To establish who or what is the cause of Romeo's and Juliet's deaths, we would have to define "cause". At the first extension, it's the strength of the poison and the sharpness of the knife that cause the death of Romeo and Juliet. At a further extension, it's the failure of Friar John to deliver the essential letter to Romeo telling him of Friar Lawrence's plan. Beyond that it might be Juliet's enforced marriage to Paris. Beyond that it could be the enmity of the families of Montague and Capulet. And beyond that, there are the causes of this quarrel, and so on. Romeo and Juliet is one of the most carefully plotted of Shakespeare's plays, making you constantly ask questions about cause and effect. Perhaps it's because the causes are so many and complex that I chose to lay primal blame on the 'inauspicious stars', on their 'star-cross'd' lives. -5- -6- ...read more.