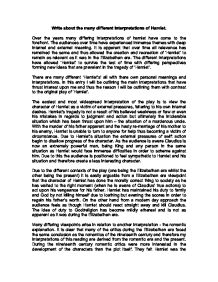 Write about the many different interpretations of Hamlet. Over the years many differing interpretations of hamlet have come to the forefront. The audiences over time have experienced immense themes with deep internal and external meaning. It is apparent that over time all relevance has remained the same and thus allowed the creation and recreation of 'Hamlet' to remain as relevant as it was in the Elizabethan era. The different interpretations have allowed 'Hamlet' to survive the test of time with differing perspectives forming new ideas that are prevalent in the tragedy of 'Hamlet'. There are many different 'Hamlet's' all with there own personal meanings and interpretations. In this entry I will be outlining the main interpretations that have thrust interest upon me and thus the reason I will be outlining them with contrast to the original play of 'Hamlet'. The easiest and most widespread interpretation of the play is to view the character of Hamlet as a victim of external pressures, faltering to his own internal desires. Hamlet's tragedy is not a result of his believed weakness or flaw or even his mistakes in regards to judgment and action but ultimately the intolerable situation which has been thrust upon him - the situation of a murderous uncle. With the murder of his father apparent and the hasty re-marriage of his mother to his enemy, Hamlet is unable to turn to anyone for help thus becoming a victim of circumstance. ...read more.

During this romantic period many writers related themselves to Hamlet and stated that they were more prone to thought than action. They felt Hamlet's expansive knowledge made it improbable for action and thus turned Hamlet into a sentimental dreamer, just like the Romantics. On the other hand in today's society many feel as though Hamlet procrastinated too much and more action was needed in order to avoid this tragedy. The audience feels Hamlet contemplated his option without any thought of action far to long and the inability of progression, as a character was placed upon him. This stream of thought enables the audience to feel as though less thought is needed when considering an option and action is the only way towards progression. The historical approach has many prevalent theories that were apparent in Shakespeare's time. Main supporters of this argue that Hamlet's (the "melancholy Dane") actions are due to a melancholic disposition. The difficulty of melancholy was well recognized in the Elizabethan age. Several traits of melancholy are sadness, fear, distrust, doubt, despair, and diffidence. Hamlet epitomizes all these traits as he is extremely sad over the death of his father and hasty remarriage of his mother; he is weary and distrusting of the Ghost and behaving with hesitancy as he procrastinates about taking revenge on Claudius. ...read more.

The final representation of Hamlet is through a religious viewpoint. Religion is represented throughout the entire play. For example Claudius murdered the King which is presented as a sin of primordial order. Claudius confesses that his fratricide parallels the murder of Abel: O, my offense is rank, it smells to heaven; It hath the primal eldest curse upon 't, A brother's murder (3.3.36-38). Claudius has committed both fratricide (killing of a sibling) and but regicide (killing of a royal). The king reflects the image of God and therefore a king is an act of rebellion against divine authority. Claudius has sinned and has turned Denmark into a fallen Eden; "thorns and thistles dominate the landscape". As with all literature we are unable to separate ourselves from our personal interpretation and that of the writers. Works of literature usually lead to various interpretations differing from era to context to experience. Each interpretation of 'Hamlet' bring different elements to the forefront. Without these interpretations of 'Hamlet' one may not be able to feel as though they receive a full understanding of the play and a lack of connection may become a dislike of the play rather than a love for the tragic tail. Shakespeare probably has his own interpretation of the play. The writer merely sets words to the page; it is our job to make them our own. ...read more.

This essay shows evidence of research and a sound knowledge of the ways it can be applied to the play. With more quotes and analysis in the earlier part of the essay, it could have achieved 4 or 5 stars. ***