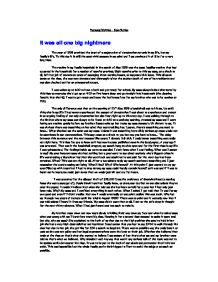 It was all one big nightmare

Personal Writing - Non-fiction It was all one big nightmare The year of 1998 provided the start of a major point of devastation not only in my life, but my family's life. To this day it is still the most vivid memory in my mind and I am convinced it will be for a very long time. The routine in my family household in the month of May 1998 was the same familiar routine that had occurred in the household for a number of months previous. Eight months prior to this my mum, as a shock to all, left her job of seventeen years of managing three nursing homes, on supposed sick leave. This all made sense at the time, she was very stressed and distraught after the sudden death of one of her residents and was also checked out for an osteoporosis scare. I was woken up at 6:00 to have a bath and get ready for school. My mum always looked shattered by this time as everyday she'd get up at 4:00 on five hours sleep and go straight into housework (the cleaning fanatic that she is!). I was to get ready and leave the bathroom free for my brother who was to be awoken at 7:00. The only difference was that on the morning of 25th May 1998 a bombshell was to hit me. Up until this point in my life I had never experienced the amount of devastation I was about to experience and resort in an ongoing feeling of not only devastation but also fear right up to this very day. I was walking through to the kitchen where my mum was always to be found at 6:40 on a weekday morning. As usual my mum and I were having are routine gossip before my brother James woke up but today my mum seemed a bit distant to me. ...read more.

It was such a shock she didn't go immediately and had to be asked twice. She wasn't expecting this until the next day and therefore was very unprepared. The prosecution had not taken as long as was first intended and therefore the case was rapidly approaching the end. Tomorrow was likely to be the day of the outcome. My mum's barrister therefore that night had to ring around everyone and ask them to provide character witnesses and statements and perhaps even be there in person tomorrow. Unfortunately the only person that could make it on that day, the family doctor Dr Galloway, had been placed on the prosecution list of witnesses and therefore could not stand for the defence. My mum put on a brave front while she explained this to nan and me but then when she was on the phone in the other room to my dad asking him to come up tomorrow morning to provide some support I overheard parts of the conversation. My mum by this time was in hysterics. She explained how frightened she was and how she had now realised it was my mum versus the NHS. There was no way she could win. During the cross-examination she was being asked questions of the like 'Where is the receipt for the �12.50 taken from Mr. Melvin Cross's account on May 18th 1993 and what was it spent on?' Quite honestly how could anyone remember that? The receipts were somewhere but a box had been lost somewhere. My mum was very pessimistic about the outcome. When we went to bed I later approached my mum told her about what I had heard and let her explain the full story to me. My dad was to travel down early in the morning and would meet them at court. My and nan were now to stay in and wait for a phone call as it could be a phone call of the outcome which was made to us anywhere between 10:00 and 17:00. ...read more.

The only trouble was my mum's room was still filled with her belongings. I must have cried non-stop for a week. I went through so many ifs and buts in my head but there was no point it wasn't worth it. If only I had have given more attention to her that morning but there was nothing I could do now. I did not realise dot I would only see my mum twice between 16th September 1999 and 281h February 2000. They were hard times and a number of things happened to my mum during her stay in Her Majesty's Prison Service but that's my mum's story not mine and would take too long to tell. We all suffered the ups and downs for six months before my mum was finally released on tag for two months and then on license or another seven. We all pulled together and struggled through it though and it has mode us realise a lot in life and brought us all closer together. A number of things changed since then, very few positive things as well. I doubt though any experience I will ever have con ever compare to and be as outstanding as that of this story. At least one thing good came out of all of this stuff though and that is I doubt my life could get much worse and things con now only get better. I have had to grow old before my time and mature a lot which my brother did not seem to accomplish according to most but the whole scenario effected everyone and each and every single one of us is now different in some way. 1 would also just like to take a minute to reflect on the life of Christine Mary Kew who helped me and my mum through this bad period and was tragically killed in the some dreadful car on 23d October 2000. R.I.P. Chris and thanks a lot for all the help you ever provided us with. It's much appreciated and well remembered. ...read more.