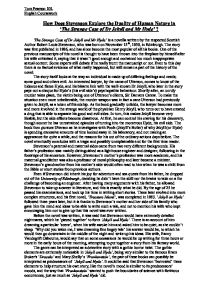 Tom Pearson 10L English Coursework How Does Stevenson Explore the Duality of Human Nature in 'The Strange Case of Dr Jekyll and Mr Hyde' ? 'The Strange Case of Dr Jekyll and Mr Hyde' is a novella written by the respected Scottish Author Robert Louis Stevenson, who was born on November 15th, 1850, in Edinburgh. The story was first published in 1886, and has since become the most popular of all his books. One of the previous manuscripts of this novel is thought to have been thrown into the fireplace by himself after his wife criticized it, saying that it wasn't good enough and contained too much inappropriate s****l content. Some experts still debate if he really burnt the manuscript or not. Even to this day there is no factual evidence of what really happened, but will remain a part of the history of the novel. The story itself looks at the way an individual is made up of differing feelings and needs; some good and others evil. An interested lawyer, by the name of Utterson, comes to know of the hideous and fierce Hyde, and his bizarre link with the well-known Dr Jekyll, who later in the story pays out a cheque for Hyde's (his evil side's) psychopathic behaviour. Shortly after, an unruly murder takes place, the victim being one of Utterson's clients, Sir Danvers Carew. To make the situation even more unbelievable, the murder weapon was in fact a cane Utterson had previously given to Jekyll, as a token of friendship. As the book gradually unfolds, the lawyer becomes more and more involved in the strange world of the physician Henry Jekyll, who turns out to have created a drug that is able to separate his good and evil sides. ...read more.

The book was written near the end of the Victorian Era, a time when the population of England represented various classes, occupations, and ways of life. 'Jekyll and Hyde' must have some sort of link with real Victorian life, just as much as the settings and ideas throughout the novel do. Dr Jekyll, the dual personality's good side, would be described as a gentleman in Victorian life; being honest and fair, keeping to common rules or morals in his daily life, inviting his friends for dinner (beginning of chapter titled: 'Dr Jekyll was quite at ease') and overall picturing a pleasant man. The front of his house, and his actions also contribute in showing the good side of Victorian society. In contrast, Mr Hyde, his actions and the setting in which he is described by Stevenson show quite the opposite-a slum-like lifestyle of a street beggar or someone on the lower scale of the social classes. Examples would be the savage crime which he commits (the Carew murder case), his untidy appearance '...he was small, and very plainly dressed; and the look of him, even at the distance, went somehow strongly against the watcher's inclination' (observation made by Mr Utterson), and his discreet, weasel-worded way of conversing. The story is narrated by Mr Utterson, mainly due to the fact that he could give the most accurate information on what is happening to probably his best friend, Dr Jekyll. His commitment (and worry) in trying to solve Jekyll's undisclosed behaviour is shown effectively when he waits for Hyde to return to his door leading to the back of Jekyll's laboratory: '...Mr Utterson began to haunt the door...' ...read more.

Both of these chapters tell the same part of the story, only just from a different perspective, so it could be said there is duality to be found in the plot, ranging from Poole's and Utterson's understanding (chapter 8) to Jekyll's (chapter 10). Stevenson's work throughout the novel is tremendously clever and well written, and I believe that he does meet his goal in portraying the duality of human nature. There are so many elements in the story that agree with the idea of a double i.e. both Jekyll and Hyde's different appearances, their ways of life and how they are in fact, complete opposites. Stevenson shows this in exquisite detail by expressing himself in such a way that a clear picture is built up in the reader's mind, which gradually builds up as more and more of the tale is revealed. There is perhaps one weakness in the novel that becomes present mainly in the second part i.e. from chapter 5 onwards. This is the confusing timeline of the story, as sometimes events don't run chronologically, and has to be read carefully to understand the full message that is being brought across. It could be said however, that this only concerns the first-time reader, and when read a number of times, and only when read a number of times, will the novel will be fully valued to its full degree. It is the sort of book that can be picked up and read many times, as the whole novel has brought with it a classic, timeless feel; an essence within itself. This is the reason why 'The Strange Case of Dr Jekyll and Mr Hyde' will never grow old, and be respected just as much now as what it was nearly 150 years ago. ...read more.