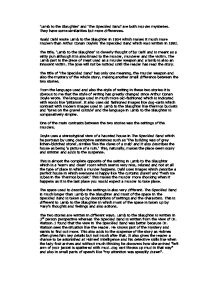 'Lamb to the Slaughter' and 'The Speckled Band' are both murder mysteries. They have some similarities but more differences.

'Lamb to the Slaughter' and 'The Speckled Band' are both murder mysteries. They have some similarities but more differences. Roald Dahl wrote Lamb to the Slaughter in 1954 which makes it much more modern than Arthur Conan Doyle's The Speckled Band which was written in 1892. The title, 'Lamb to the Slaughter' is cleverly thought of by Dahl and is meant as a witty pun although it is also linked to the murder, murderer and the victim. The Lamb part is the piece of meat used as a murder weapon and a lamb is also an innocent victim. The joke will not be noticed until the reader has read the story. The title of 'The Speckled Band' has only one meaning, the murder weapon and also the mystery of the whole story, making another small difference between the two stories. From the language used and also the style of writing in these two stories it is obvious to me that the style of writing has greatly changed since Arthur Conan Doyle wrote. The language used in much more old-fashioned which is indicated with words like 'pittance'. It also uses old fashioned images like dog-carts which contrast with modern images used in Lamb to the Slaughter like thermos buckets and 'tyres on the gravel outside' and the language in Lamb to the Slaughter is comparatively simpler. ...read more.

In the two stories the victims were different as well. In Lamb to the Slaughter, the victim is Patrick Maloney, the murderers' husband. The two main characters appear to have some sort of a routine which is indicated as Patrick enters 'punctual as always' and before he came Mary had started listening for the sounds of his entry. This routine is broken on the night that the story is set on. Patrick broke the normal routine when he 'did an unusual thing. He lifted his glass and drained it in one'. This adds to the already tension-filled atmosphere as the reader wonders what is wrong with their seemingly perfect lives. It is made clear that Patrick is unsettled and anxious and he is also quite unpleasant which is obvious when he turns down her polite offer of some cheese with a "No". The relationship between the victim and the murderer is completely unique to other stories as they have had a complete role-reversal because the victim is usually the beautiful woman and the killer is usually the anxious agitated man. This has not only opposed the stereotypical image of a killer and a victim but shocked the reader and made them carry on reading. ...read more.

The most exciting part was when Dr. Roylott was killed by his own murder weapon. In Lamb to the Slaughter, the point where I wanted to continue reading was when Mary killed her husband with a leg of lamb because I wanted to see if she would escape punishment. The most exciting part of the book was when Mary killed her husband. I enjoyed Lamb to the Slaughter much more than The Speckled Band as it was very funny and it also did not go into great detail with the investigation so it was not as boring In conclusion, Although The Speckled Band is a much better murder mystery than Lamb to the Slaughter, I found Lamb to the Slaughter a better story and I enjoyed it more. It also had some humour in whereas The Speckled Band did not. The differences were probably because the two books were written in very different times. When Doyle wrote The Speckled Band, the only people who could read were middle class and so the language and style was different from Dahl's era. If Lamb to the Slaughter had been written in Doyle's time, the audience would probably not have responded very well, mainly because there was a woman murderer and women did not play as big a role in society as in the 1950s. They also would've found the language strange and a bit modern. ...read more.