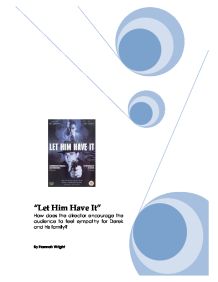 Let him have it

"Let Him Have It" How does the director encourage the audience to feel sympathy for Derek and his family? By Hannah Wright Let Him Have It In this film "Let him have it" how does the director, Peter Medak, encourage the audience to feel sympathy for Derek Bentley and his family? Refer to three specific episodes from the film in you answer. "Let him have it" by Peter Medak is a very powerful film based on a controversial true story. The narrative is about a murder committed by Christopher Craig and Derek Bentley. Peter Medak, the Director, explained "I made this film to break hearts" and the way the scenes have been established and portrayed by the actors increase the emotional response of the viewer. The reason that this film is so effective is due to the amount of emotion and sympathy the Director portrays towards Derek Bentley. However, the film has a distinct bias towards Derek Bentley as it follows his characterisation compared to that of the other actors. Within this essay I will draw out the techniques the Director has uses to create a truly emotive production. I have chosen three episodes from the film where I believe the Director has emphasised the sympathy towards Derek and his family most effectively; the opening chapter, this depicts Derek when he was a young boy during World War II, the murder of the police officer, this is when Derek and Chris Craig attempt to break into a premises and the hanging. As the film opens it immediately provides the feeling of; sadness, sorrow, grief and unhappiness. The background to the credits are pitch black and the credits are written in old style, types set with white writing, establishing the feeling that the film is set in the past. The background music is sad, gentle and to some extent slightly emotional providing a sense of unhappiness. ...read more.

this shows how easily he is led by Chris. The Director shows a family observing Chris and Derek climbing up the fence, they immediately call the police. The audience is now aware that the police are coming; it also creates suspense, as you wonder what will happen to Derek and Chris if they get caught. The Director keeps switching to the police and their movements setting the scene for what is about to happen. The viewers can see the level of police presence surrounding the boys where as Chris and Derek are completely unaware as they are playing on the roof, running around like children catching each other in a school playground. When Derek and Chris are surrounded by the police, Derek exclaims, "my dad is going to kill me", he could not think of anything worse than being reprimanded by his father. A police officer enters the roof and Derek struggles with Chris to try to prevent him shooting him, he warns the officer that Chris has a gun. Derek does not move when he was warned to stay still by the officer. It is at this stage when a critical point of the whole film is depicted, the officer asks Chris for the gun. Derek shouts to Chris "let him have it" meaning to give the gun to the officer; however Chris shoots the officer. Throughout this scene, Derek is portrayed as trying to help. The audience can feel sympathy for Derek because when he is trying to be of assistance but is being pushed around by the police. The audience do not feel as much sympathy for the policeman as they do for Derek because the viewer does not know about the officer's background, as we do with Derek, he is not characterised. The Director makes it very clear that Derek does intend to hurt or kill anyone and has no animosity towards the police officer. The Director shows a clear bias towards Derek in the way the scene is depicted. ...read more.

Derek does not struggle or shout protesting his innocence, if the director didn't show this the audience would not feel as much sympathy for him. All the prison officers stopped working and after he was hung they bowed their heads showing their sadness for Derek. The protesters are now singing hymns for him as if they were at a funeral. When Derek is hung the camera closes in on his shoes in order to try to achieve the atmosphere, yet not showing the macabre hanging. The camera pans towards the light coming from the ceiling, as if Derek was escaping from the prison and going home or towards heaven. The camera flies over Derek's town into his bedroom and down the stairs, as if he was walking towards the living room to his family. The camera makes the audience feel like Derek is now a ghost or an angle. The camera zooms in towards Derek's family together in the middle of the living room. Then over their shoulders to the clock on the mantelpiece, it stops ticking. This sequence of camera shots maximises the sympathy towards Derek and his family and creates an overwhelming feeling of injustice. The Director used multiple techniques in the film to create sympathy for Derek and his family for example; panning, high shot, low shots, close ups, body shots, etc. The music throughout the film is similar, slow and, sad using the 'minor key' to create a slightly uncomfortable feeling. The lighting of Derek and the people around him, for example, Derek was predominantly in the light when he was around Chris, this suggests his innocence. The cumulative effect of the techniques creates a powerful, highly effective and emotive film which provides the viewer with a compulsion to keep watching and till the conclusion. After the conclusion the viewer is left with a true feeling of injustice and sadness especially when you find out it is based on a true story. ?? ?? ?? ?? English Coursework "Let Him Have It" by Hannah Wright ...read more.