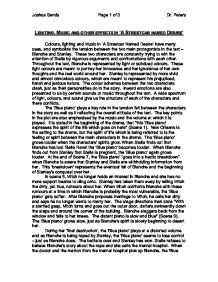 Lighting, Music and other effects in 'A Streetcar named Desire'.

LIGHTING, MUSIC AND OTHER EFFECTS IN 'A STREETCAR NAMED DESIRE' Colours, lighting and Music in 'A Streetcar Named Desire' have many uses, and symbolize the tension between the two main protagonists in the text - Blanche and Stanley. These two characters are constantly trying to win the attention of Stella by vigorous arguments and confrontations with each other. Throughout the text, Blanche is represented by light or subdued colours. These light colours are meant to portray her innocence and her ignorance of her own thoughts and the real world around her. Stanley is represented by more vivid and almost obnoxious colours, which are meant to represent his prejudiced, harsh and jealous nature. The colour schemes between the two characters clash, just as their personalities do in the story. Inward emotions are also presented to us by certain sounds or music throughout the text. A wide spectrum of light, colours, and sound give us the structure of each of the characters and there conflicts. The 'Blue piano' plays a key role in the tension felt between the characters in the story as well as it reflecting the overall attitude of the text. The key points in the plot are also emphasised by the music and the volume at which it is played. It is stated in the beginning of the drama, that "this 'Blue piano' expresses the spirit of the life which goes on here" (Scene 1). ...read more.

A world her mind calls home. At the start of the play, Blanche throws a fit when Stella turns on the overhead light and has a good chance to see her. She exclaims that "Daylight never exposed so total a ruin!". Blanche does the same thing to Mitch later on. She tells Mitch, "I bought this adorable little coloured paper lantern at a Chinese shop on Bourbon. Put it over the light bulb! Will you, please?" This keeps Blanche out of reality for the time being, but towards the end of her fall, she is forced to see reality by Mitch. Mitch shows up later in Scene 9 looking at his worst, reflecting his feelings at that time. He then shines the light on Blanche where she is forced to see her world - ugly as it may be. Mitch then pulls the lamp away and Blanche becomes unglued. She has been exposed and at the same time enlightened. Blanche's "magic world away from reality" (Scene 6) was created by her ex-husband. The way he shocked her destroyed her ability to deal with reality for the rest of her life. In Scene 6, Blanche describes to Mitch about her spouses relations with another man. Evidently, this was a massive shock to her, described as it being "like you suddenly turned a blinding light on something that had always been half a shadow, that's how it struck the world for me". ...read more.

He grins at her as he knots the tasselled sash around his waist" (Scene 10). The colours, lights, and shadows go crazy as Blanche is taken by Stanley. This is the straw that broke the camels back as far as Blanche is concerned and the start of Blanche's end has begun. The end of 'A Streetcar Named Desire' is a sad for one Blanche and to a certain extent Stella. Stanley has already defeated Miss Dubois, and since he has completely dominated the situation, Stella will not believe Blanche's story of the r**e. "Lurid reflections appear on the walls in odd, sinuous shapes" (Scene 11), indicating that Blanche has finally lost it. Stanley and Stella have Blanche sent away to the mental hospital and there is no way for her to fight her way out. She is defeated. The doctor soothes her defeat and the lighting becomes steady, "As he speaks her name, her terror subsides a little". All of Blanches torment has now ended and she is taken to a mental institution. However, we may believe that Stella's is just beginning due to her "luxurious sobbing". The "swelling music of the 'Blue piano' and the muted trumpet" is heard and everything is back to how it was. This 'return to normality' encapsulated by Steve saying "The game is seven-card stud" and the curtain drawing. Joshua Sands Page 1 of 3 Dr. Peters ...read more.