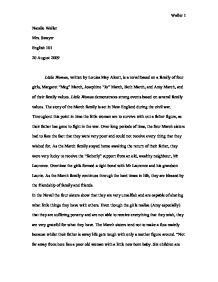 Natalie Waller Mrs. Sawyer English 101 20 August 2009 Little Women, written by Louisa May Alcott, is a novel based on a family of four girls, Margaret "Meg" March, Josephine "Jo" March, Beth March, and Amy March, and of their family values. Little Women demonstrates strong events based on several family values. The story of the March family is set in New England during the civil war. Throughout this point in time the little women are to survive with out a father figure, as their father has gone to fight in the war. Over long periods of time, the four March sisters had to face the fact that they were very poor and could not receive every thing that they wished for. As the March family stayed home awaiting the return of their father, they were very lucky to receive the "fatherly" support from an old, wealthy neighbour, Mr Laurence. Overtime the girls formed a tight bond with Mr Laurence and his grandson Laurie. As the March family continues through the hard times in life, they are blessed by the friendship of family and friends. ...read more.

The girls were very disappointed to give their food away but knew that there was a family suffering severely without any food, so they decided to the right thing. In Little women the four March sisters show loyalty by looking out for each other. Through the hardest times in life the girls manage to stick by each other and along the way on their journey they learn from their mistakes. Meg, Jo, Beth and Amy are not your everyday type of sisters who may fight a lot with one another. The girls infrequently have fights because they are so alike, they are so kind to one another and share anything they have for that is all that they do have. "I let the sun go down on my anger; I wouldn't forgive her, and today, if it hadn't been for Laurie it might have been too late! How could I be so wicked?' said Jo half aloud, as she leaned over her sister, softly stroking the wet hair scattered on the pillow. ...read more.

Page 70.Through the novel it is important to be able to have the love and support of friends and family so that it makes life easier through the difficult and depressing patches. In conclusion Marmee only wants best for her girls, but in her eyes this does not mean the wealthiest man that the girls can get their hands on this means, happiness and security from the one they tend to spend their rest of their lives with. "Money is a needful and precious thing,-and, when well used, a noble thing,-but I never want you to think it is the first or only prize to strive for. I'd rather see you poor men's wives, if you were happy, beloved, contented, than queens on thrones, without self- respect and peace." If along the way the girls did not have one another and there values then Meg, Jo, Beth and Amy would struggle more then what they already do. Through out the novel family values are very important and are expressed in many ways, not only through family but close friends too. The March sisters go through life with the love and support of each other and share an amazing journey. ?? ?? ?? ?? Waller 1 ...read more.