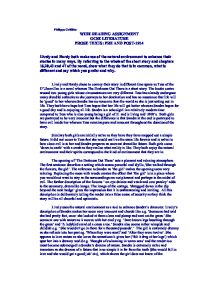 Lively and Hardy both make use of the natural environment to enhance their stories in many ways.

Philippa Griffiths WIDE READING ASSIGNMENT GCSE LITERATURE PROSE TEXTS: PRE AND POST-1914 Lively and Hardy both make use of the natural environment to enhance their stories in many ways. By referring to the whole of the short story and chapters 16,20,43 and 47 of the novel, show what they do that is in common, what is different and say which you prefer and why. Lively and Hardy chose to convey their story in different time spans as Tess of the D'Ubervilles is a novel whereas The Darkness Out There is a short story. The books centre around two young girls whose circumstances are very different. Tess has already undergone many dreadful setbacks as she journeys to her destination and has no assurance that life will be 'good' to her whereas Sandra has no reason to fear the world as she is just setting out in life. They both have hope but Tess hopes that her life will get better whereas Sandra hopes for a good day and is enjoying all life. Sandra is a schoolgirl in a relatively modern time compared to Tess who is also young being a girl of 21 and is living mid 1800's. Both girls are portrayed to be very innocent but the difference is that Sandra at the end is portrayed to have evil inside her whereas Tess remains pure and innocent throughout the duration of the story. Similary both girls are initially na�ve as they have they have mapped out a simple future. It did not occur to Tess that she would not live the same life forever and is na�ve to how close evil is to her and Sandra prepares an unevent dreamlike future. Both girls come 'down to earth' with a crash as they realise what reality is like. They both enjoy the natural environment and their spirits correspond to the kind of environment that they are in. ...read more.

Hardy has chosen particular words and phrases to enhance his images. He uses onomatopoeic words such as 'mingled' and 'prattled' that make the images more life-like as the reader can associate with the sound. Occasionally he also uses alliteration eg. 'soft soft wind' for effect. He overloads his nouns with adjectives eg. 'The spectral half compounded, aqueous light' which shows that he wants to make his story exquisitely life like. Lively's story is set on a Saturday afternoon, the time is more specific in comparison to Hardy's were it does not state the day but the time of year because it is covering a longer time span not just one afternoon. Both writers enhance their stories by using the time and weather to create an atmosphere. A Saturday afternoon in Summer ('polleny SUMMER grass') conjures up a relaxing and cheery atmosphere as the girl is likely to be on her Summer holidays without worries of school and Summer is pleasant time of year for the weather. If the story had set in Winter, it would have created totally the wrong atmosphere for the story's themes to be achieved to the maximum. Hardy also uses the time of year to create an effect for example Tess is walking to Tabolthays in Spring (bird-hatching morning) which is reminiscent of the fact thatTess is beginning a fresh start and leaving the desolation of her old life behindIn nature the old makes way for young and like this Tess is trying to make her old life die in her mind making way for the fresh start to grow over it but it must be remembered that like in nature everything eventually dies. Both writers similarly chose to have pleasant weather for the scenes, which captures the mood. Lively has the sun shining ('It was all right out here in the sunshine) and Sandra 'brushing through the grass' in 'bare brown legs' as it is warm. ...read more.

The weather reflects the desolation of Tess's life as it throws out every unpleasant element possible in contrast Talbothays is in the Summer and has lovely weather. Hardy creates images at Flintcomb Ash that are as harsh as the images at Talbothays were pleasant eg. ' 'but raced horizontally upon the yelling world sticking into them like glass splinters till they were wet through.. This image effectively makes the reader beware of the severity of the rain. Lively does not describe how nice the weather is when she is describing Packer's End as it would create the wrong atmosphere but makes it seem dark and cut out from the sun 'The dark reach of the spinney.' In conclusion, I prefer 'The Darkness OutThere' compared to 'Tess of the D'Ubervilles'even though I prefer the character of Tess to Sandra, as I like the way Hardy has deeply delved into it instead of Lively's light touch. I admire her as heroine for her valour, her will to not give up and her beauty. Sandra irritates me with her fickle behaviour on such things as dirt but I suppose she has the intelligence to learn from her mistakes and except what she has learnt. Lively has with her simply imagery wonderfully capturing the imagination yet also I like Hardy's in-depth description although it is perhaps too lengthy sometimes. Lively is much more to the point than Hardy who I feel sometimes loses the plot by invading too much into the narrative clearly expressing his own personal views in too much detail. The main reason for preferring 'The Darkness Outhere' was the theme. The ending really had a profound effect on me and it made me reflect on life and question myself as a person. The themes of 'Tess of the D' UberVilles were not as effective towards me personally because the messages seemed distanced to just applying to the story. ...read more.