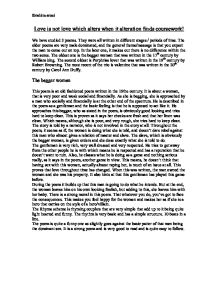 Love is not love which alters when alteration finds

Love is not love which alters when it alteration finds coursework! We have studied 3 poems. They were all written in different stages / periods of time. The older poems are very male dominated, and the general theme/message is that you expect the man to come out on top. In the later one, it makes out there is no difference within the two sexes. The oldest one is the beggar woman that was written in the 17th century by William king. The second oldest is Porphrias lover that was written in the 19th century by Robert Browning. The most recent of the trio is valentine that was written in the 20th century by Carol Ann Duffy. The beggar women This poem is an old fashioned poem written in the 19the century. It is about a woman, that is very poor and weak social and financially. As she is begging, she is approached by a man who socially and financially is at the other end of the spectrum. He is described in the poem as a gentleman and the basic feeling is that he is supposed to act like it. He approaches this beggar, who as stated in the poem, is obviously good looking and tries hard to keep clean. ...read more.

The rhythm is very basic and has a simple structure. 10 beats in a line. The poem is quite a funny one as slightly goes against the basic patter of that men being the dominant s*x. It is a strong poem and is very good to read and is quite easy to follow. Porphyrias's lover This poem is quite different. Firstly, it is told by the person who is committing the murder and is told in a quite positive way. As if she wanted it to happen, and it wasn't against her will. The beggar woman is told in a negative view, and supports the women whilst going against the gentleman. This poem is an original old fashioned poem. It is dominated by males and women seem to be lower than the men. Porphyria is a beautiful, rich and posh woman who has fallen in love with this man who is of a lower class to her. She is beautiful as it says she makes the cottage warm which means that she is a beautiful person. Warmth is almost a symbol of love and means she is very good looking. She is very high class as it says from pride, which means that she is very proud of were she is and doesn't want to change it and is very loyal. ...read more.

It says that its platinum loops shrink to a wedding ring. This indicates a similarity between the two. Onions peel in circular round layers like a wedding ring. It also tries to give across that this onion can somehow make a relationship stronger like a wedding ring ties a couple together permanently. The repetition of the word take it means that this person is constantly trying to give this onion and the other person is constantly not accepting it, almost rejecting it. It is a bit chatty as, as soon as the person rejects it the other person, is describing it more and trying to make it a good thing and force it to them. This makes it into a bit of a conversation. This poem has no rhythm or rhyme at all and is just totally random! My reaction to this poem is very strange. An onion is not something you would naturally give and you had to read it extensively to understand it's true meaning and after you have read the poem, you realise it is very good and the actual meaning of it is very strong and powerful. Ibrahim arosi ...read more.