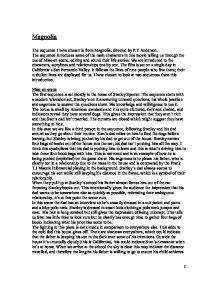 Magnolia The sequence I have chosen is from Magnolia, directed by P.T Anderson. The sequence introduces some of the main characters in this movie telling us through the use of Mise-en-scene, editing and sound their life stories. We are introduced to the characters, storylines and relationships one by one. The film is set on a single day in California's San Fernando Valley. It follows the lives of nine people who live there; their turbulent lives are displayed for us. I have chosen to look at two sequences from this introduction. Mise-en-scene The first sequence is set mostly in the home of Stanley Specter. The sequence starts with a modern television set, Stanley's on it answering unheard questions, his whole position and eagerness to answer the questions show. His knowledge and willingness to use it. The house is small by American standards and it is quite cluttered, dark and shaded, and indicators reveal they have several dogs. This gives the impression that they aren't rich and that Stan's dad isn't married. The curtains are closed which might suggest they have something to hide. In this case we are like a third person in the sequence, following Stanley and his dad around as they go about their routine. Stan's dad relies on him to feed the dogs before leaving, but Stanley is being pushed by his dad to get out of the house. ...read more.

It may also indicate Stan's happiness while at school. But the sky is cloudy, still I would like to assume that Stanley likes arriving at his school. The second sequence focuses on a different character the Grown up ex-boy genius Donnie Smith. Just as in the first sequence from this clip we have a fast tracking shot into a television, which then fills and becomes the screen. This is to show this next sequence is a TV show. The same game show "What Do Kids Know?" is shown but as is the room in a distinctly dated style. They are wearing light blue graduation robes and graduation hats suggesting the young children are knowledgeable beyond there years. The editing in this sequence is distinctly old-fashioned long takes. This adds to the authenticity of the piece it stays true to the 60's game show style. The sequence is set in the Studio and uses a young Jimmy Gator shown previously as the host. I get the impression Donnie want's to be on the game show a lot more than Stanley as he shows a desire to regain his lost youth to go back to the time he knew his parents loved him. His success and fame have become a substitute. There is no very fast editing to show eagerness. ...read more.

His car also shows, along with the suits, he's apparently not rich anymore. He's also obviously well known local personality because a man comes running up and shouts "It's quiz kid Donnie Smith!" Donnie seems used to being recognized. The EX-Boy genus is confused even though he's just blatantly ran the car into the store he didn't do it deliberately and is taken aback by the fact he's forgotten to stop his car. He looks like he was daydreaming. Maybe he's recently fallen in love. He's getting braces, he clearly doesn't need. This is to make himself look better. He thinks that this person would want him to change to be better even in this superficial way; Donnie feels that he's not good enough. He's daydreaming about this person he's fallen in love with. The thing that makes me think this is the music it's Dreams by Gabrielle. This combined with his actions shows he's thinking about his daydream coming true about his love and it's reciprocation by this person. This short sequence in the film seems to be packed with different types of imagery relating to the characters which over time has given me a good understanding of the narrative, the relationships between the characters are clear contrasting elements like these two characters are readily apparent and within five minutes each character and there part of the narrative has been shown, making apparent the skill of the Writer/Director P.T Anderson. ?? ?? ?? ?? 1 1 ...read more.