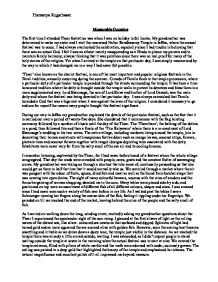 Memorable Occasion The first time I attended Thear festivities was when I was on holiday in Sri Lanka. My grandmother was determined to make my sister and I visit the renowned Nallur Kandhasamy Temple in Jaffna, where the annual festival was to occur. I had always overlooked the celebration, especially since I had trouble in believing that there was an actual God. I felt I was an atheist merely masquerading as a Hindu to please my parents and to maintain family harmony; always thinking that it was pointless since there was no real proof for many of the holy stories of the religion. Yet when I arrived at the temple on that particular day, I was simply mesmerised by the way in which it had changed me in a way I had never felt possible. 'Thear' also known as the chariot festival, is one of the most important and popular religious festivals in the Tamil tradition, annually occurring during the summer. Crowds of Tamils flock to the temple procession, where a particular deity of a particular temple is paraded through the streets surrounding the temple. It has been a time-honoured tradition where the deity is brought outside the temple walls to protect its devotees and bless them in a more supplemented way. Lord Shanmuga, the son of Lord Shiva and brother of Lord Ganesh, was the main deity and whom the festival was being devoted to that particular day. ...read more.

I felt an overpowering stench of kanakambaram flowers, usually known as the firecracker flowers, from the women's hair as it was something traditional to wear. The orange, of the flowers, was so bright that it reminded me of the juice from when a mango was split open, back in the market. The saris that were festooned by the Tamil women were all so beautiful, bright and vibrant. The women were definitely dressed to impress. The many women crowding at the temple entrance adorned colours from vibrant orange and soothing blue to deep purple and hot pink. As the crowd began to move I accidently brushed my hand across the ostentatious sari of a woman standing in front of me, and I managed to feel the soft, smooth material, which was then interrupted by the roughness of the sequins that were stitched perfectly on the sari. I was amused as I thought of myself as walking through a multi-coloured sea. I was immediately jolted from side to side because of the crowd trying to get a better view of the emerging deity. This infuriated me yet I resisted the impulse to reach out and pull back the horde of women, which had just shoved past me, by the hair. I felt bits of hair in my mouth; as I looked down I realised it was the hair of the woman standing in front of me and I pulled away in disgust. ...read more.

I watched on closely as they brushed their hairy bodies against the blossoms to sample the syrupy, perfumed juices, whilst ravenously munching the sumptuous food. My family and I sat in a huge circle chattering about the day's events and relishing in the appetizing vegetarian food. The sweet rice and the mix of spicy curries, such as the sour pickles, bitter gourd and steaming potatoes tasted succulent and the aroma of the luscious curries made me wish for more. The diamond-shaped orange desert known as 'Kesari' melted in my mouth. It was then that I began to really understand the necessity of having such festivals. Not only did it bring the whole family or village together, it brought the whole Tamil race together. Many people, like us, had come from abroad specifically for the Thaer festival and this level of importance given to the festival made me appreciate it in a way that I had never before. The miracle with the devotee and the strong faithfulness withheld by the male devotees who pierced their bodies also amazed me. Was there really a God to look over and protect us people? I was momentarily confused by my beliefs, but after the events of that day I was pretty sure I couldn't deny the fact that there was a god. Maybe he just presented himself to the most dedicated of his devotees. The Thear could be said to be what started off my true religious beliefs in Hinduism. ?? ?? ?? ?? Thamanya Kugathasan ...read more.