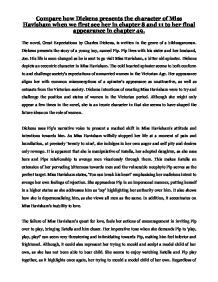 Compare how Dickens presents the character of Miss Havisham when we first see her in chapter 8 and 11 to her final appearance in chapter 49. The novel, Great Expectations by Charles Dickens, is written in the genre of a bildungsroman. Dickens presents the story of a young boy, named Pip. Pip lives with his sister and her husband, Joe. His life is soon changed as he is sent to go visit Miss Havisham, a bitter old spinster. Dickens depicts an eccentric character in Miss Havisham. The cold hearted spinster seems to both conform to and challenge society's expectations of unmarried women in the Victorian Age. Her appearance aligns her with common misconceptions of a spinster's appearance as unattractive, as well as outcasts from the Victorian society. Dickens intentions of creating Miss Havisham were to try and challenge the position and status of women in the Victorian period. Although she might only appear a few times in the novel, she is an iconic character in that she seems to have shaped the future ideas on the role of women. Dickens uses Pip's narrative voice to present a marked shift in Miss Havisham's attitude and intentions towards him. As Miss Havisham wilfully stopped her life at a moment of pain and humiliation, at precisely 'twenty to nine', she indulges in her own anger and self pity and desires only revenge. ...read more.

As her dress has 'lost its lustre' and had been 'trodden ragged' it can also reflect on the destruction of her heart. In conjunction, her emotions in chapter 49 seem to change as she becomes humanised. Miss Havisham seems to realise that she has done wrong to both Pip and Estella as she says she is 'not all stone......that there is anything human in my heart' this in result makes the reader see her more as a person than an object of ridicule. As the realisation of what she has done to Estella as she 'took her heart away and put ice in its place' Dickens makes the reader have sympathy for her as her honesty begins to humanise her. She begins to feel self hatred as she believes that Pip hates her 'too much to bear to speak to me' showing how she feels worthless and defeated. The last words that she speaks 'take the pencil and write under my name, I forgive her' can show how Dickens, in these final words, shows the reader that throughout the novel Miss Havisham's emotions have changed as she searches for forgiveness.The tone of this section is confessional as Dickens is showing the reader that Miss Havisham is longing for self forgiveness. Furthermore, Dickens seems to suggest that Miss Havisham will never be at peace as she will continue to torture herself for what she has done. ...read more.

As Pip tries to distinguish the flames, he drags down the 'great cloth from the table and with it dragged down the heap of rottenness and all the ugly things that sheltered there' and wrapped it around Miss Havisham, showing his care and consideration that has grown for Miss Havisham. Whilst Pip cradles Miss Havisham on the floor, the 'beetles and spiders were running away over the floor' whereas before the spiders were nibbling at Miss Havisham, again a sense of purging, cleansing and healing. As they lay Miss Havisham on the table with a 'white sheet loosely covering her' suggests that she is finally at peace and furthermore gives a sense of purity and cleansing with the pure white sheet. 'The phantom air of something that had been and was changed' Dickens shows the reader that Miss Havisham has changed during this and has become reborn. To conclude, Dickens presents Miss Havisham as a challenge to Victorian society. He also shows that love is redemptive and necessary and without it, we are nothing. Within Miss Havisham's reformation Dickens shows the strength of her character. His intentions in creating Miss Havisham were to try and show the hardship that women who were rejected by the Victorian society had to go through and how cruel the society have been in marginalising them. By doing so Dickens has cleverly began to deconstruct the stereotype of a spinster and questions expectations. ...read more.