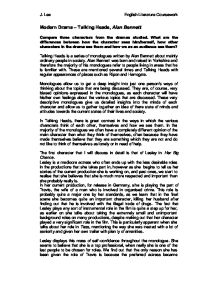 Modern Drama - Talking Heads, Alan Bennett Compare three characters from the dramas studied. What are the differences between how the character sees him/herself, how other characters in the drama see them and how we as an audience see them? Talking Heads is a series of monologues written by Alan Bennett about mainly ordinary people in society. Alan Bennett was born and raised in Yorkshire and therefore the majority of his monologues refer to people living in areas that he is familiar with. These are mentioned several times and Talking Heads with regular appearances of places such as Ripon and Harrogate. Monologues allow us to get a deep insight into just one person's ways of thinking about the topics that are being discussed. They are, of course, very biased opinions expressed in the monologues, as each character will have his/her own feelings about the various topics that are discussed. These very descriptive monologues give us detailed insights into the minds of each character and allow us to gather together an idea of there state of minds and attitudes towards the current states of their lives and society. In Talking Heads, there is great contrast in the ways in which the various characters think of each other, themselves and how we see them. In the majority of the monologues we often have a completely different opinion of the main character than what they think of themselves, often because they have made themselves believe that they are something which they are not and do not like to think of themselves as lonely or in need of help. The first character that I will discuss in detail is that of Lesley in Her Big Chance. Lesley is a mediocre actress who often ends up with the less desirable roles in the productions that she takes part in, however as she begins to tell us her stories of the current production she is working on, and past ones, we start to realise that she believes that she is much more respected and important than she probably really is. ...read more.

This incident results in Susan, under the influence of alcohol, falling over and hitting her head on the ground. This is seemingly to the fan club's delight as they begin to have a large discussion over her treatment, rush the vicar back home to his wounded wife, and 'invade' the vicarage pretending to be caring for Susan, when in fact they seem more bothered about having a good snoop around the house to see how they live. Susan begins to turn to dark comforts in an attempt to add some fun to her life and make herself feel a bit better. We start to realise that Susan is heavily dependant on alcohol, particularly when Geoffrey is panicking because the communion wine has being drunk, and it is quite obvious who the culprit is. Perhaps even worse than the alcohol, we later learn that Susan has been making visits into Leeds and sleeping with an Asian grocer. Whilst we still feel somewhat sorry for Susan, we realise that she is in the wrong with her alcohol abuse and cheating on her husband. Susan herself also seems to know that what she is doing is wrong, as she talks about it mainly with a lot of regret but does not seem to be in total control of the situation. Towards the end of the monologue we learn that Susan is going to meetings of Alcoholics Anonymous, which clearly shows that she is trying to get help for her situation, however we feel sorry for the fact that she is only there because Ramesh Ramesh, the grocer, has persuaded her to go and her husband is simply exploiting her problems in public to improve his own personal appeal and career prospects in the Church. Many people described in the monologue simply see Susan as a pitiful vicar's wife who has no life and has been pushed to the edge, resulting in alcohol addictions and depression. ...read more.

Susan finds herself suffering from deep depression all of the way through the monologue and therefore leads us to feel sorry for her, but a little disgusted when she tries to combat that depression by having an affair and making her life even worse by becoming an alcoholic. Lesley has a very over-rated opinion of herself and we therefore see her in a much different light for most of the way through the monologue as she appears stuck up and self-obsessed, however there are times where she gives away the fact that she is a lonely woman and a failure in her career and we occasionally do feel sorry for her situation. Irene is similar to Lesley in that she believes she is an important figure in society, and her petty letters lead us to think that she is just a nosey woman who gets enjoyment out of annoying other people and complaining about stupid things. However later in the monologue we realise that she is in much the same situation as Susan; lonely and depressed, so at the end we are left feeling almost guilty for our early perceptions of her and glad that she has managed to turn her life around. In conclusion, through Talking Heads, Alan Bennett has explored people's use of perception to show how the way one person thinks of themselves can be far different from what other people see, and how both opinions can be wrong. Many of the characters deceive themselves at some point, and quite often the reader is left with a strong negative opinion of that character because of what they have done, despite this being linked with their poor living situation and therefore not really their entire fault. Many of the monologues leave the reader feeling some guilt for the early perceptions of the characters, as we see towards the end of the monologue that they can be good people inside, but just need a chance to have fun, happiness and success in their lives. ?? ?? ?? ?? J. Lee English Literature Coursework ...read more.