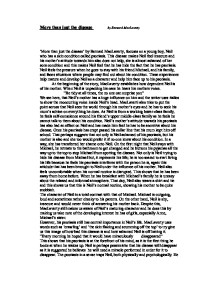 More than just the disease by Bernard MacLaverty

More than just the disease by Bernard MacLaverty 'More than just the disease' by Bernard MacLaverty, focuses on a young boy, Neil who has a skin condition called psoriasis. This disease makes Neil feel insecure and his mother's attitude towards him also does not help, she is almost ashamed of her sons condition and this makes Neil feel that he has hide the fact that he has psoriasis. Neil feels the pressure when he goes to stay with his friend Michael, and his family, and faces situations where people may find out about his condition. These experiences help mature and develop Neil as a character and help him face up to his psoriasis. At the beginning of the story, MacLaverty establishes how dependent Neil is of his mother. When Neil is unpacking his case he hears his mothers voice. "Be tidy at all times, the no one can surprise you" We see here, that Neil's mother has a huge influence on him and the writer uses italics to show the reoccurring voice inside Neil's head. MacLaverti also tries to put the point across that Neil sees the world through his mother's eyes and he has to seek his mum's advice on everything he does. As Neil is from a working lower-class family, he feels self-conscience around his friend's upper middle-class family as he feels he cannot talk to them about his condition. ...read more.

Neil then uses an excuse, which seems to work for his mother. "I've got my period" This shows Neil naivety and shows that he doesn't know about this sort of stuff, probably only because his mother hasn't told him about it. Again we see her, Neil trying to relate back on to what his mother would say when she is under this situation. To save Neil's embarrassment, MacLaverty creates Michael's mum has a tactful and compassionate character, who instead of laughing at Neil brings him into the kitchen to help her do the dishes. Michael and his family at this point realise how badly Neil didn't want to go swimming and it must be for a personal reason that he didn't want to share. Throughout the story we see Neil longing for his mother. "He just wanted to climb the stair and be with her behind the closer door" This is an important symbol in the story as it shows that both Neil and his mother are hidden away from everything - from people, from life. Neil feels isolated around Michael's family and feels that he can't relate to anybody. It also shows that Neil still hold on to a part of his childhood. MacLaverti uses the sea as a symbol of life. ...read more.

The boys' friendship also seems to improve now that Neil's condition is out in the open. The talks and the humour that they share show that they have a new understanding of each other and show that they can now be honest and open with each other. At the end of the story, the do go swimming, however Neil feels more comfortable doing it in the darkness as he still does not feel totally comfortable showing all his body. Again the symbolism of Neil's life and the sea come into place as Neil stays in the shallows of the water, so too are the shallow steps he has taken into life. But MacLaverty makes us establish that this is the first time Neil has ever showed any of his body and therefore we should take an understanding point of view that at least it is a start for him. Again, a contrast with Michael is developed, as he is swimming into the deep end, and MacLaverty also makes this represent his life as he is fully stepped into it, is independent of him. Therefore, MacLaverty starts with a totally nieve, easily influenced character of Neil and transforms him into a more matured, at ease with himself character. The story left me feeling hope for the character of Neil that hopefully he will one day fully step into life and not care about how people will judge him, upon his psoriasis. ...read more.