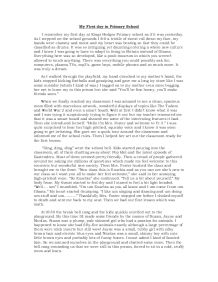 My first day at primary school

My First day in Primary School I remember my first day at Kings Hedges Primary school as if it was yesterday. As I stepped on the school grounds I felt a trickle of sweat roll down my face, my hands were clammy and moist and my heart was beating so fast they could be classified as drums. It was so intriguing yet daunting entering a whole new culture and I knew I was going to have to adapt to living in Britain instead of Ghana. Everything here was so developed, like a posh museum in which you weren't allowed to touch anything. There was everything you could possibly ask for; computers, plasma TVs, mp3's, game boys, mobile phones and so much more. It was truly a dream. As I walked through the playfield, my hand clenched to my mother's hand, the kids stopped kicking footballs and gossiping and gave me a long icy stare like I was some outsider (which I kind of was.) I tagged on to my mother even more begging her not to leave my in this prison but she said "You'll be fine honey, you'll make friends soon." ...read more.

Thankfully Mrs. Foster stopped me before I choked myself to death and sent me back to my seat. Then we had our first lesson which was math. At10:30 the break bell rang and the kids quickly scuttled out to the playground. By this time I'd made some friends by the names of Suzan, Jayne and Nicolas. Suzan was a plump, pale skinned girl who had a passion for animals. I happened to know she had fifty-five animals exactly although a large percentage of them were stick inserts but still wow! Jayne was a small, tubby girl with silky brown hair and electric blue eyes and Nicolas was a small, skinny boy with cute little brown eyes and probably lots of funny bones. I must admit I kind of fancied him. So we amused ourselves in the playground and chatted some more. Then the bell rang reminding us that we were still in this prison, forced to sit in a cold, stuffy room and learn. Our next lesson was English which I wasn't too excited about because I didn't really know much English. In fact I had to have a mentor advising me on the country and the culture. ...read more.

Heads shot up instantly and I prayed they wouldn't think I farted. Too bad wishes don't come true. The class roared with laughter yet again, probably thinking I was a right riot. I was so red with embarrassment but I just had to sit there and take it. Not wanting to continue this lesson anymore I continued still red with embarrassment but Nicolas cheered me up with some of his hilarious jokes. The bell signaling it was home time rang and everybody dashed out eager to go home. I packed up my stuff, said goodbye to Suzan, Jayne and Nicolas and set out to find my mum. She was waiting for me at the school gate and she rushed in the hug me. "So, how was your first day in Kings Hedges" she beamed. "Well, I farted terribly loud and called the teacher Mother but on the whole it was good and I made some great new friends" I beamed back Then we strolled home hand in hand. I know I did some pretty bad, no, shockingly embarrassing things on my first day at Kings Hedges Primary School but perhaps this place isn't a vile prison after all but merely a warm, welcoming school which I might actually grow to like. ...read more.