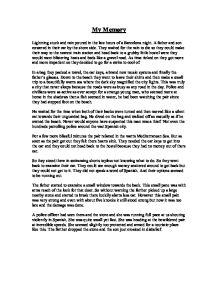 My Memory Lightning stuck and rain poured in the late hours of a Barcelona night. A father and son cowered in their car by the shore side. They waited for the rain to die so they could make their way to the nearest train station and head back to a grubby little hostel were they would meet blistering heats and beds like a gravel road. As time ticked on they got more and more impatient so they decided to go for a swim to cool of. In a bag they packed a towel, the car keys, a brand new music system and finally the father's glasses. Down to the beach they went to leave their shirts and then make a small trip to a beautifully warm sea where the dark sky magnified the city lights. This was truly a city that never sleeps because the roads were as busy as any road in the day. Police and civilians were as active as ever accept for a strange young man, who seemed more at home in the shadows then a fish seemed in water, he had been watching the pair since they had stepped foot on the beach. He waited for the time when both of their backs were turned and then moved like a silent cat towards their unguarded bag. ...read more.

Hours seemed to drag by and the pair felt the pressure drop. They were stuck in a strange country with no money, not speaking the language and wearing nothing but swimming shorts and to top it all off the farther could not see due to his glasses being stolen. The warm night however calmed them down. The light breeze blew round there necks as the stars shined like floating oil-lamps suspended by the slight hope left for the pair. Hustle from nearby restraints and the road seemed to block out all unhappy noises from the city. The pollution and smoke seemed to be overwhelmed by the delicious smell of saltwater showing that for a city there was no better place to be arrested. Lights flashed and sirens roared as a speeding car hurtled round the corner just stopping before their own. A tall officer stepped out. Hoping that he would speak English they both blurted out at him. But this small glimmer of hope to clear there names was snatched as quickly as it appeared. The police whispered together, with very little point. The pair suddenly became very aware of the fact that they were armed. They police violently pointed at the police car instruction the pair to get into the second, now fearful car. ...read more.

Except this time they were greeted y a squat man in a small pinstriped suit and a moustache that easily could cover his chin. He spoke to them in a very slow patronising voice. "Do.....you......speak......English?" he asked. They both simultaneously replied. We could not believe this. We now had the chance to clear our names. We both blurted out what had happened. He silenced us very soon and took the farther out of the room leaving the son alone in now what seemed a very scary place. The farther was lead back to the room filled with flags were he was able to explain what had happened. So now the only problem was the locked car. The pair was escorted back to their car were the police used a tricky device to open the car. it was really just like a bit of string that was poked round the door but it did the job. So then they were left. In the situation that they should have been in 10 hours before. Yet the car was no better off. With a much scratched window and missing a key. This was still quite a problem just one that required more then to tired fools could handle. So they headed to the train station and further to thair beds for some much deserved sleep. ...read more.